Send in the swat team. It was late when we went to bed on Thursday, but I wasn’t tired, so I picked up my book and snuggled down for a read.

On this particular night all was nice and quiet in the neighborhood, and the soft breeze ruffled the curtains bringing with it the fragrance of lilacs. I could hear a soft humming in the distance, which seemed to increase in volume as it came closer to me. CLOSER TO ME!!!!! That was no soft humming! That was a loud buzzing! No it wasn’t a mosquito, it was much worse. I lay paralyzed as I watched it come closer to me, trying to attack like some crazed maniac, but it was as elusive and agile as that flying feather on one of those cat thingee toys. I do not exaggerate when I tell you that this creature was ginormous. Huge to the nineth degree is an understatement. Yes, ladies and gentlemen, you guessed correctly. It was a fly! 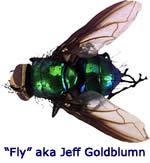 Not just any fly. It was a mutant! I expected Jeff Goldblum to pop out any moment and say hello. I lay watching as it frantically buzzed around the bedroom, crashing into walls and the mirrors like a crazed drunken sailor, who had not yet gotten his land legs. Normally I am not bothered by something like a piddley fly, but this one was huge, and blue. Ever since I had watched a National Geographic TV special on the “fly”, I was totally grossed out just remembering it’s life cycle, never mind the close-ups of its germy feet and bulging eyeballs. The bedroom door was open, and I hoped it would fly out and exhaust itself somewhere in the house. I imagined finding its worn out corpse on the kitchen floor, and then unceremoniously disposing of it in the garbage.

It was apparent however, that this monster had no such plans. It flew into our bathroom, and I debated jumping up and shutting the door. Darn! That fly must be a mind reader as well. No sooner was the thought in my head, when that thing came shooting out of there like it had been shot out of a circus cannon. I dodged….. It dive bombed…. I made a counter move by evading him….. It tried hiding in the covers…..and I responded by swatting with my book, which was totally ineffective. “Fly” now settled himself on top of the wardrobe, a place I couldn’t reach, so I decided to get reinforcements. I knew that my book would never take this enemy down. That fly only had many eyes for me.

This was not a fair fight, as I only had two eyes and they were unreliable in the “sight” department. I took the opportunity to make a dash for the kitchen where I kept the most useless fly swatter on the face of the earth….. a plastic hand, neon pink, that a blind person could see coming. What chance did I have against the many sharp eyes of that fly? 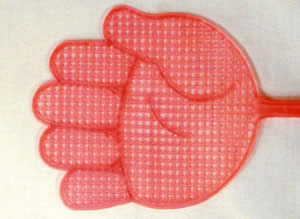 This is the fly killer, my weapon of
Body Mass Destruction.

I returned to the bedroom loaded for bear.. er… I mean fly. Oh, he was cunning all right, and shifty as the day is long. He had hidden himself well, I assumed in order to regroup, and then to begin the next assault. I felt like a thief, sneaking around in my own bedroom, waiting to pounce the moment that fly made its hiding place known. After ten minutes of this activity, I let my guard down, headed back to bed and pulled up the covers. Hubby was oblivious to this raging battle of mayhem, and kept snoring and wheezing in slumber land. I continued reading while keeping one eye on the lookout for “fly”. Sure as “Bob’s your Uncle” he appeared and proceeded to bombard me with his germy, creepy fly body. He bounced off my head (I could imagine where his filthy fly feet had been, ewwwwwwwww….) and I panicked and started swinging wildly with my swatter.

Eureka!! I connected with a hit that sent him sailing into the wild blue yonder. I trampolined out of the bed looking for his carcass, wanting to make sure he wasn’t going to rise from the dead during the night and launch another assault. Sure ‘nuff, his body lay lifeless on the hardwood floor at the foot of the bed. I gazed down at his body, feeling a little bit of shame that I had ended his existence. Then his leg moved, and I whacked that fly into next Tuesday.

He was nothing but a grease spot now, and I whipped him off the floor with a Kleenex and threw it in the dust bin. Yes people, I am now a killer with no remorse. I turned out the light and crawled into bed. I could rest easy now. At least until the next time.

Men come in all kinds of models, something like the …

Last weekend, hubby and I went for lunch. So off …