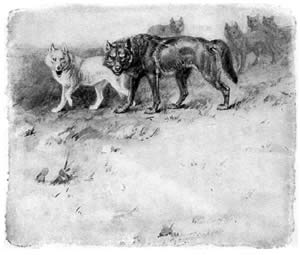 Lobo was an American wolf that once dwelled in the Currumpaw Valley of New Mexico. During the 1890s Lobo and his pack, deprived of natural prey by settlers, turned to livestock for food. The ranchers attempted to kill off Lobo and his pack by poisoning the carcasses. But the wolves removed the poisoned pieces and threw them aside. The ranchers then tried to kill the wolves with traps and hunting parties, but these efforts also failed. That’s when Ernest T. Seton accepted the challenge, and became determined to earn the $1,000 bounty for capturing Lobo, the leader of the wolf pack. Seton first tried poisoning five baits, carefully covering traces of human scent and setting them in Lobo’s territory. When all the baits had vanished, Seton assumed that Lobo was dead. However, he later found all five of the baits placed in a neat little pile, covered in other “matter” for which Lobo was responsible.

Seton then bought new specialized traps and carefully concealed them. But when he checked the traps later, Seton found that Lobo’s tracks led from one trap to the next, exposing all of them. Well, an effort that was initially supposed to take two weeks stretched into months of failed attempts to capture Lobo, and Seton grew tired and frustrated. His big break came while camping out above the creek where snow geese and cranes were wintering, and he spotted Lobo’s tracks following a set of smaller tracks. He then discovered Lobo’s weakness, his mate, a pretty little white wolf named Blanca.

Seton quickly set several traps in a narrow passage, hoping that Blanca would take the baits that Lobo had thus far managed to avoid and/or remove. And Seton got lucky. He caught Blanca when she’d investigated Seton’s planted cattle head. When Seton found her she was howling with Lobo standing by her side. Lobo quickly ran off to a safe distance, then watched Seton and his men cruelly kill Blanca by breaking her neck with ropes tied to their horses. Seton stated that he heard Lobo’s howls for days afterward, describing them as having “an unmistakable note of sorrow in them… but, it was no longer the loud, defiant howl, but rather now a long, plaintive wail.” However, although Seton actually felt bad for the grieving wolf, he continued on with his plan to capture him.

Seton knew that Lobo would follow Blanca’s scent to his ranch where they’d taken her body, despite the danger. So Seton set traps using Blanca’s scent as bait. And on January 31, 1894, Lobo was finally caught, each of his four legs pouring blood, clutched in the traps as he defiantly stared down Seton. When Ernest approached, Lobo howled the loneliest and saddest howl that he’d ever heard. Deeply touched by the wolf’s bravery and loyalty to his mate, Seton’s heart broke and he could not kill him. So he and his men roped Lobo, muzzled him, removed him from the traps and secured him with a chain. But no chains were necessary, because Lobo just stood there and gazed sadly across the prairie he so loved, and died that night. Seton cried knowing knew that Lobo had died of a broken heart, and it was all his fault.

In honor of Lobo, Seton built the Ernest T. Seton Memorial Library and Museum, at the Philmont Scout Ranch near Cimarron, New Mexico where Lobo’s pelt is the feature display. And until his death in 1946, Seton championed the plight of wolves. “Ever since Lobo”, Seton later wrote, “my sincerest wish has been to impress upon people that each of our native wild creatures is, in itself, a precious heritage that we have no right to destroy, or to put beyond the reach of our children.”

Seton’s story of Lobo has so touched the hearts of people around the world, that it was partly responsible for changing global views toward the environment, and spurred the start of the global conservationist movement. The story had a profound influence on the world acclaimed broadcaster and naturalist, Sir David Attenborough, and inspired the 1962 Disney film, ‘The Legend of Lobo’. Lobo’s story was also the subject of a 2007 BBC documentary, directed by Steve Gooder.

Stuff to make you think laugh and wonder keeps the …