The Hunger Games: Mockingjay Part 1, is an American film directed by Francis Lawrence and released on November 17th 2014. It stars Jennifer Lawrence, Woody Harrleson, Philip Seymor Hoffman, Josh Hutcherson, Liam Hemsworth, and Donald Southerland. The film is the 3rd of 4 movies in the film franchise based off the 3rd and final book of the young adult series.

Katniss has survived the Quarter Quell and is now caught up in the official resistance to the capital’s rule. At district 13 she meets President and finds that the people there are hoping she becomes the symbol of the revolution against the capital’s oppressive rule. She agrees to be that symbol if they can rescue Peeta Malark and the rest of the Hunger Games participants from capital officials who would use them to further their own ends.

As stated in the introduction, this is the 3rd of 4 movies from the 3rd book of a 3 book series. It is an incomplete story with a cliffhanger ending. It’s a buildup to another movie that won’t come out until 2015. It’s also a blatant cash grab by the studio in order to make as much money as possible. Just like how the Hobbit book was turned into 3 movies, or how the last Twilight book was turned into 2 movies, or how the Avengers: Infinity War will be turned into 2 movies. There isn’t a complete story here.

With that being said, what is here is incredibly well done. When they are trying to film propaganda pieces on Katniss and start the revolution, they can’t fake it. It has to be genuine emotion, otherwise it all falls to pieces. Katniss is still uneasy about being the Mockingjay, and uses that to her advantage in a high stakes negotiation. She knows that they need her, so she makes sure that she can get what she needs. Even if that would come at a huge cost. President Snow is also a highlight of the movie, always being one step ahead of Katniss with her never realizing it. There is one particular scene where a rescue team flies to the capital to rescue Peeta and the other Hunger Games victors, only to find that he let them leave so that a brainwashed Peeta could try and kill Katniss. Excellent stuff really.

The movie is a buildup for Mockingjay Part 2, but what’s here is still very well done.

I give The Hunger Games: Mockingjay Part 1 7.0 explosive arrows out of 10

Clifford T. Hofferd is a university graduate living in Prince George. You can read his blog at thengpblog.blogspot.ca 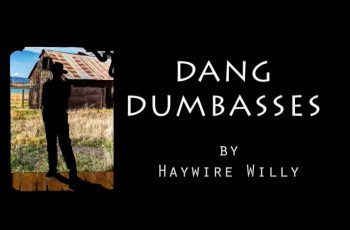 Dang Dumbasses with Special Guest Mark From Alaska “In this …