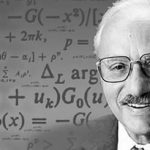 Mr. George Bernard Dantzig, a doctoral candidate at the University of California (USC), Berkeley in 1939, arrived late for his graduate-level statistics class and found two problems written upon the blackboard. Not knowing that they were examples of ‘unsolvable’ statistical problems, he mistook them for a homework assignment, jotted them down and solved them. The equations that he solved are actually more accurately described best as unproved statistical theorems, rather than unsolvable problems.

Assumed They’d Been Assigned For Homework

In 1986, George recalled the event in a College Mathematics Journal interview:
“It happened because during my first year at Berkeley, I had arrived late one day for a Jerzy Neyman class. On the blackboard there were two problems. I assumed they’d been assigned for homework, so I copied them down. A few days later I apologized to Neyman for taking so long, but the problems seemed to be harder than usual. I asked him if he still wanted them. He said yes, and told me to put them on his desk.

About six weeks later, around eight o’clock on a Sunday morning, we were woke by someone banging on our front door. It was Neyman. He rushed in with the papers in hand, all excited. “I’ve just written an introduction to one of your papers. Please read it so I can send it off right away for publication.” For a minute I had no idea what he was talking about. To make a long story short, the problems on the blackboard that I had solved, thinking that they were homework, were in fact two famous unsolvable math problems in statistics. That was the first inkling I had that there was anything special about them.”

Guardian Angel Ghost Story… This story was told to me …

Halloween comes every year, and for mobility challenged children, that …