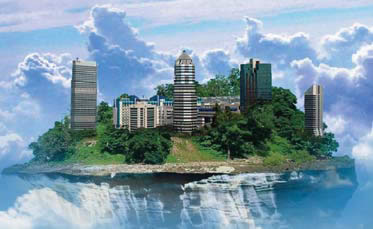 Imagine walking along and seeing a massive city, complete with tall skyscrapers and trees, floating hundreds of feet above a river. That’s what happened in Huangshan City, China, on June 16th, 2011.

A mysterious floating island in China had experts puzzled. Scientific mainstream says that its an optical illusion, a complex mirage, or Fata Morgana (images very far away carried great distances over the sea when an undercurrent of cold air meets a great burst of hotter air above). Fata Morgana is blamed for old seafarer’s tales of flying ships and floating islands.

Another theory is that it is a man-made hologram, an illusion created by Project Blue Beam, a theoretical program used to make people believe in alien invasions by projecting holograms into the sky.

A few have even asked whether people actually witnessed a different world. It may sound far fetched, but when you consider that an entire ‘unidentifiable’ city appeared, floating above the middle of a river, in a very crowded area, that was clearly seen by thousands of people, filmed by news crews, that no one has viable explanation for … you certainly have to start to wonder.

Farmville Cows Get Government Subsidy If you ever doubt the …