We were sitting here looking out the window at all the snow this morning, thinking to ourselves, “Sweet, spring will be here soon.” But then I vividly remembered what we went through last year. So, you know what, I hope we have winter ALL year long!

This post is from May of 2013… but I thought I’d bring it up for the enjoyment of all our new friends who may not have seen it, so they understand why I want winter to last forever!! ~ Crazy Lady

(Images and videos of tent caterpillars in our yard below)

It’s camping season again, and tents are everywhere in Prince George, British Columbia, but they are the kind of tents that no one likes.

Certain areas of B.C. and North America are under siege by Tent caterpillars. Tent caterpillars are not only destructive to deciduous trees (trees that get new leaves every year), but, as we have come to find out, they also wipe out lettuce, flowers and other greenery in the garden!

We had read about the problems certain parts of town were having with them last year, and we even saw 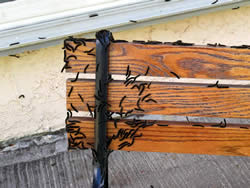 a few of the leaf munching critters here and there, but this year they have totally invaded us. They are dangling from the trees, invading the flower beds and garden, congregating on the sides of our house, on fences, sheds and the greenhouse, and seem to think that our patio bench is the perfect place for them to hold their annual general convention. 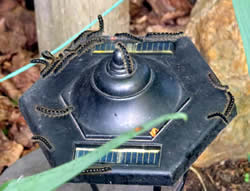 They cover the solar screens on our LED garden lights, so thick in one flower bed, that you can’t see the lights at night. They are munching on our newly grown vegetables, and just as fast as we kill them, 10 more appear. While outside the other day, I listened closely to a sound similar to a gentle rain, trying to figure out its actual origin. Finally I took my camera outside and zoomed in on the trees. That rain sound is the sound of thousands, if not millions, of little caterpillar legs making their way up and down the tree trunks and branches, eating all the leaves. From there, after they have stripped the tree of its foliage, they start casting themselves upon the breeze, suspended by sticky thread-like strands, as they gently lower themselves to the ground.

The top of our fences look like freeways during rush hour. Thousands of multi-legged exoskeletons undulate along the top of them all the way to one end, then realizing that there is no where to go once there, turn around and come all the way back. Over and over again. I almost feel like we need to paint traffic lines for them! My spouse seems to delight in squishing masses of them underfoot, but the darn things absolutely give me the heebee geebees, and those web like strands that help give their name, were enough to give me nightmares. In fact, if I was to go out and sun bathe on our patio today, within a couple of hours I’d look like the page in Gulliver’s Travels where he was tied down by the Lilliputians.

At first, all I wanted to know is where they came from and why,
but, now all I want is for them to LEAVE! 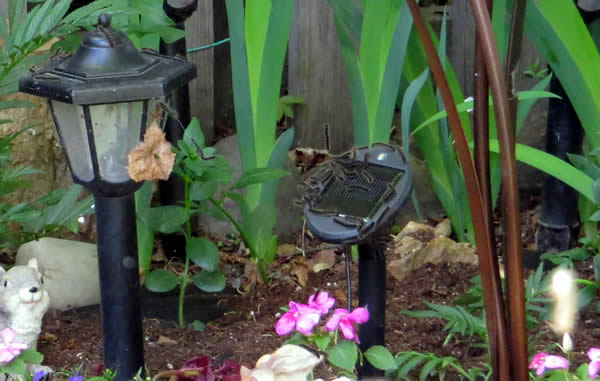 One of my flower beds 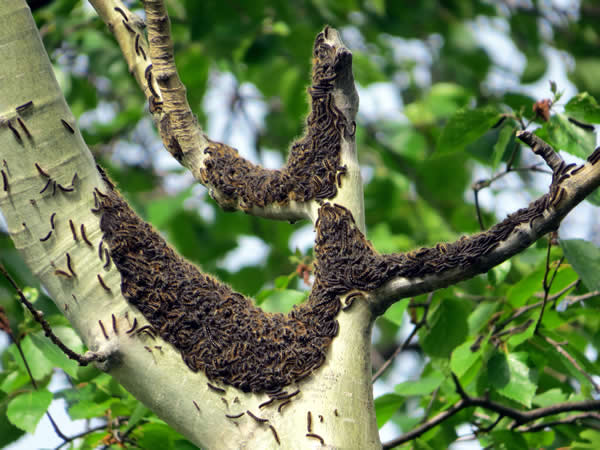 Tree in our backyard with Tent Caterpillars 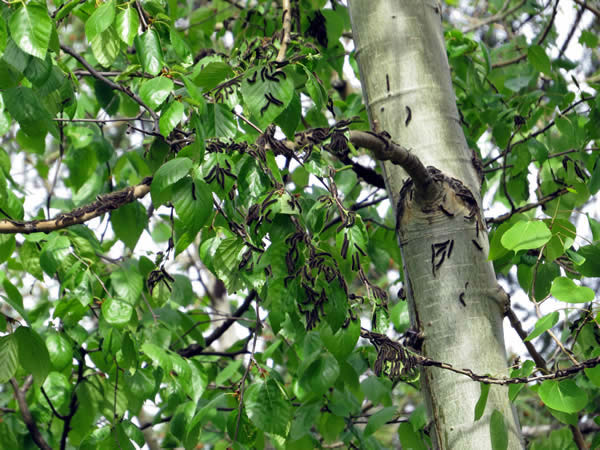 Tent Caterpillars eating the leaves of our trees 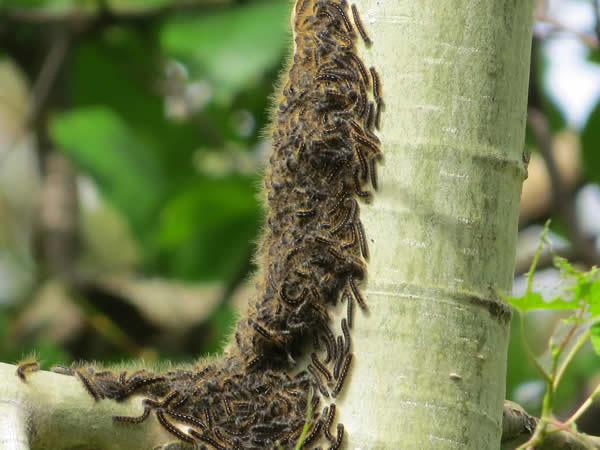 Tent Caterpillars – Can’t imagine how many there are just in this little patch.

VIDEOS – You will want to watch these in full screen to get the full effect.

Tent Caterpillars Congregating On Our Bench

Tent Caterpillars Dangling From The Trees!

Just One Of Our Trees From Bottom To Top
I Don’t Even Want To Guess How Many Tent Caterpillars Are On It!

Another Tree In Our Yard With Clusters Of Tent Caterpillars

Here’s some information from http://publications.gc.ca for those of you who want to know more about them:

The three most common types of tent caterpillars in Canada are Eastern, Western and Forest tent caterpillars. They got their name from the tent-like structures the larvae (caterpillars) build. The size of the tent increases as the larvae grow. The caterpillars mature in four to six weeks, reaching a length of about 2 to 3 cm. Eastern tent caterpillars are hairy and brownish black, with a light stripe down the back. Blue spots and brown yellow lines are found along the side of their bodies. The adult moths are usually a reddish-brown color, but can be yellow-brown as well.

Western tent caterpillars tend to be reddish brown on top and pale underneath. They have a row of blue spots on their backs, with orange spots mixed in between. The adult moths are orange-brown, with yellow lines on the wings. Forest tent caterpillars feed on deciduous trees in many parts of Canada. Outbreaks frequently last two or more years, and usually happen at intervals of ten years or more. They have a similar life cycle to the Eastern and Western tent caterpillars, with one distinct difference: instead of building tent-like webs, they make a type of silken mat on the trunk or branches where they collect to rest, leaving only to feed on the leaves. These caterpillars are a pale blue color with black, and have a series of white spots on the back. The adult moth is a yellow-brown color.

The Eastern and Forest tent caterpillar moths lay their eggs in late June or early July, while the Western tent caterpillar moth appears later and lays eggs in August. The eggs are laid in groups of 150 to 350 and encased in a frothy substance that hardens into a shiny Styrofoam-like material, forming a dark brown or gray band that straddles or encircles twigs of susceptible trees. In the spring, as soon as foliage opens, the eggs hatch into young caterpillar larvae that begin to make communal tent webs. The Eastern tent is usually built in tree or branch forks, while the Western tent may enclose the tips of branches.

In June or July, the caterpillars enter the pupal stage of development, covering themselves in cocoons. The cocoons may be found on tree trunks, fences, debris and beneath sheltered areas such as raised plant boxes. Approximately 10 days later, the adult moth will come out of its cocoon and mate within 24 hours. The female immediately begins to lay eggs for the next spring, producing only one generation of tent caterpillars every year.

Eastern Tent caterpillars have been seen in North America since 1646. Outbreaks happen about every ten years and sometimes last up to two years. Tent caterpillar outbreaks are periodic but do not happen on a regular cyclic basis because they largely depend on several environmental and biological factors. Although they seldom kill the infested tree, these caterpillars can cause severe damage, often nearly defoliating the entire tree. If damage is minor and the tree is healthy, the tree can bud again later in the summer. However, repeated defoliation can weaken trees and make them more susceptible to other types of stress. 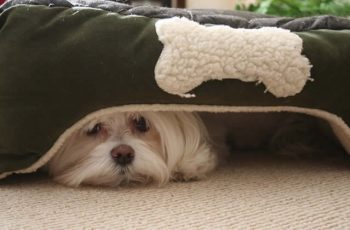 This is a little story about the importance of following …