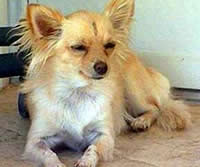 Zoey was a five pound long haired Chihuahua, which might seem tiny by dog standards, but Zoey was a true giant among canines. This story about Zoey began one beautiful, sunny July afternoon in Masonville, Colorado. Booker West, a heart stealing one year old boy, was over visiting his grandparents who’d taken advantage of the good weather to make sure Booker got some fresh air and exercise. Booker loved water, so soon had made his way to the backyard’s bird bath and began happily splashing and giggling. Also outside was a little dog named Zoey.

Booker’s grandparents, Monty and Denise Long, had always had animals in their lives, so when their little Chihuahua companion passed away, their son gave them another one they named Zoey. Little did they know then how incredible the tiny ten month old, five pound, long-haired Chihuahua would turn out to be. For as he was doing some yard work, Monty (the grandfather) was surprised when little Zoey suddenly bolted from his side toward Booker, then began yelping.

Monty ran over to investigate and quickly realized that Zoey had gotten in between the toddler and a diamondback rattlesnake. Apparently, as Booker had been playing, the snake had slithered closer and closer before coiling and attempting to strike the child. But Zoey leaped into the way, intercepting the first strike and because she refused to move, other bites on her forehead. The Longs quickly grabbed Booker out of harm’s way and rushed Zoey to the veterinarian – about forty five minutes away.

They didn’t think Zoey would make it because her little head had swollen to the size of a grapefruit. Still, the doctor administered the antivenom and then they all waited. And Zoey did what no one thought possible. It took four days for her to be downgraded from critical condition, and within days she was back to her active, loving and playful self, acting as if nothing had ever happened.

“She got in between Booker and the snake, and that’s when she yipped,” the boy’s grandfather Monty Long told the Loveland Daily Reporter-Herald reporter. “These little bitty dogs, they just don’t really get the credit that they deserve,” added Booker’s grandma, Denise Long. The Longs were delighted to receive the Shining World Hero Award on behalf of Zoey. In addition to the beautiful crystal plaque, were two lovely jackets with “Hero Zoey” imprinted on the back, a cozy dog bed which fit her size just right, vegetarian dog food and treats, as well as some of Master’s recent books and DVDs for Zoey’s caregivers.

Mr. and Mrs. Long were very happy Booker wasn’t hurt and that Zoey had received all of the recognition that she did. They collected pictures, articles and memorabilia to one day give to Booker so that he’d always remember Zoey’s story… the itty bitty Chihuahua with a huge heart that saved his life!

From: God, also known as the Creator, Allah, Waheguru, Bhagwaan, …