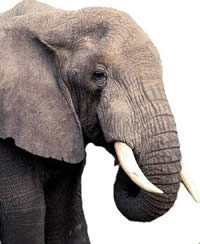 Apparently, humans are not the only mammal that likes to drink alcohol, and drink way too much of it. In fact, if given a choice between alcohol, or any other beverage, elephants prefer alcohol.

An event in India’s Dumurkota village, spawned newspaper headlines such as, “Trunk and Disorderly!”, and “Herd of Elephants Goes on Drunken Rampage After Mammoth Booze Up”. The Times of India tells the latest tale this way: “… a herd of 50-odd inebriated jumbos ransacked three houses and damaged paddy crops. The strong smell of mahua drink drew the elephants out of the forest, and they raided the shop selling the drink. The herd wasn’t happy, even after they guzzled down 18 containers of mahua, and ransacked the adjoining huts in search of more.”

Gigantic angry drunks with tusks have gone on destructive, town-smashing binges since at least the 1990s. In 2010, there was “Elephants on Drunken Rampage Kill 3 People” in 2004, “6 Drunk Elephants Electrocute Themselves” and in 1999, the understated, but seminal, BBC headline, “Drunken Elephants Trample Village”.

Elephants frequently clash with humans in India, as they struggle to adjust to shrinking habitats, damaging homes, and sometimes even killing people. Marshall Jones, senior conservation adviser at the Smithsonian Conservation Biology Institute, estimates that as many as 300 people die in conflicts with elephants every year in India, while in the same time period, up to 200 elephants lose their lives to humans.

Boys will be Boys By Betty Mermelstein My sons were …