For decades the residents of Prince George, British Columbia, have strongly suspected that local gas stations were deliberately inflating gas prices, and that they colluded to fix gas prices at the highest rate.

As long as the fuel came from the same supplier, the suspected gas price fixing continued unchecked and unabated. Then, the skies parted, the sun shone through, and an announcement was made that Costco was putting in a gas bar. The citizen’s of Prince George hoped the news would shock the price abusers into lowering the over-inflated prices, but the fuel price rip off continued right up to the very moment that the Costco fuel began to flow.

Then, almost miraculously, within hours gas prices in town dropped 10 cents per litre!!! Costco’s opening price was $129.9 per liter, while every other station in town was at $139.9. Within hours, those prices dropped to $129.9. Over the next week, Costco lowered their price to $123.9, and the other stations quickly followed suit. 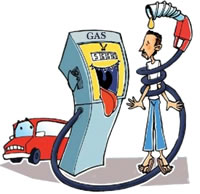 So why such a huge price difference? Did international oil prices drop? No. Were there sudden federal and provincial fuel tax reductions? No. It turns out that the answer is that Costco does not purchase its fuel from the local refinery, and instead ships its fuel in. This has many suspecting that the local refinery and station owners had been carefully orchestrating the deliberate rip off of consumers for a very, very long time, to the tune of millions and millions of dollars.

Whatever the reasons, the prices are pleasing to the people of Prince George, who now see Costco as a corporate White Knight, and the increased profits by local businesses are beginning to translate into a surging consumer confidence.

In the last 2 years the internet has seen the …

I knew I’d have to resurrect the pantyhose for the …