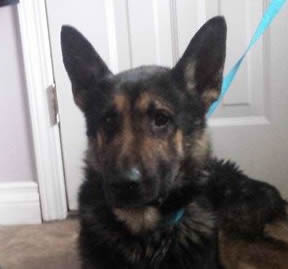 During the dark of a cold early spring night on April 26th, 2015, an injured and terribly malnourished German Shepherd hero wandered into the carport of a family home in the Ferndale area of Prince George, British Columbia. The next morning the homeowners discovered it with bones protruding, scared of every sound and movement, and obviously in extreme distress. They tried their best to approach the poor thing to help, but were unsuccessful because tragically the abused dog was just too frightened and aggressive to let anyone near.

Ingenuously, the quick thinking homeowners posted a picture of the poor animal on Facebook. Someone else saw the post and thought, ‘if anyone could help this poor creature, it would be a person that is familiar with German Shepherds’, so they tagged our next hero, Cheryl Bricker, in the post. Cheryl, who is an owner and breeder of German Shepherds, saw the post and immediately took action. She instantly knew that the poor thing was probably not really aggressive, it was just really, really scared.

She drove to the house and did her best to get close to the anguished canine, but it was demonstrating too much fear. After about a half hour of unsuccessful attempts, Cheryl had a brilliant idea. She returned home and made the starving dog a nice warm meal, then drove back. Slowly approaching, murmuring soft words of love and assurance, she got down low and moved as close as she could to the disoriented dog, and waited.

Eventually the aroma of mouth watering food overcame the German Shepherd’s fear and anxiety, and he inched toward Cheryl. Distrustfully snatching a gulp of food, it wasn’t long before he allowed her to pet him as he ate. Cheryl was finally able to gain enough confidence from the frightened and neurotic bag of bones to get a leash on him, into her car, and straight to the Ospika Animal Hospital to have the poor creature looked at. She couldn’t get in right away, so an appointment was set for the next day.

She knew he would need to be neutered, because she could see that he was wounded in that area. However, she was unable to have a close enough look to see the extent of damage, because it was too painful for him. Doing a quick calculation for the price of neutering, and to put weight back on, she figured she was looking at $300.00 – $400.00 dollars tops.

Cheryl could not have been more horribly wrong.

The next day she took the incredibly ill and frightened four-legged soul to his appointment. Once he was sedated enough to examine, the vet was absolutely horrified to discover that some heartless bastard had tried to neuter the precious pet like you would a bull or sheep on the farm. The skin and hair of the scrotum were absent, so the testicles were fully exposed and putridly infected. The testicles had attempted to fuse to its flesh, and signs of scar tissue were beginning to develop. When he was weighed, everyone’s hearts broke to find out he was so cruelly malnourished, that he only weighed 55 pounds.

Cheryl’s heart was shattered. How could someone possibly do this to such a beautiful and remarkable dog? Hating to ask, she enquired what it would cost to heal the animal. The vet’s estimate to repair the horrific damage, and save the dog’s life, was from $900.00 – $1,200.00! Cheryl was floored. She didn’t have that kind of money for a stray, but there was no way she was going to let that poor animal go through anymore pain, or be put down. However, what was she going to do? What could she do? Fearing the worst, but not willing to give up the fight to help those pain filled eyes, she shared her story with some friends on FaceBook.

Then magic began to happen, as magical people in a very magical place called Prince George performed the miraculous things they are world-reknowned for doing. Cheryl’s friend placed her plea on the Prince George and Area Pet Network FaceBook page, and it spread though social media like wildfire. True to northern legends of generosity, folks in the community and surrounding areas rallied, and in less than 12 hours more than enough money was prepaid at the vet to cover the entire bill and 2 follow up visits!

He was spiritually and physically fragile, and not a very good candidate for surgery, but everyone agreed that it could not be put off, so Cheryl gave the vet the go ahead. 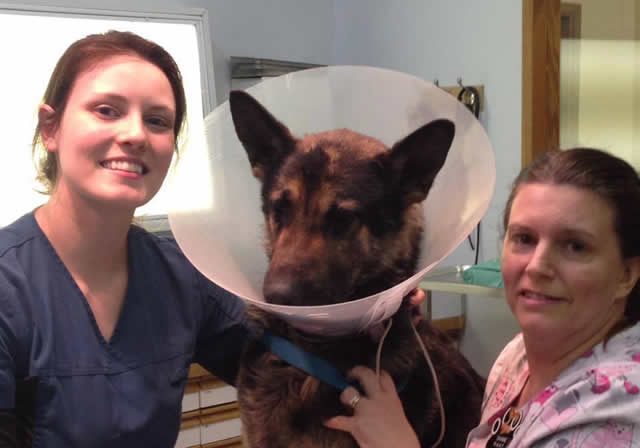 Ready for surgery with the great people at the Ospika Animal Hospital.

After about two nail-biting hours, the vet announced that the surgery had been a success, and the recovering patient was now resting. As monitoring was required overnight, Cheryl returned the next day to take him home.

Waking up from surgery.

Friends also contributed cash directly to Cheryl for his aftercare, and at this point she thinks all of his aftercare will be covered. This includes high quality food and any therapy she feels he will need to help gain strength and mobility in his joints, and build muscle, since his muscle mass has almost completely atrophied.

After the marvelous outpouring of community support from friends and complete strangers, Cheryl decided to create a Facebook page to keep everyone updated about the miraculous dog that an entire community helped to save. Not knowing its name, she initially called the page “The Dog With No Name”. But tiring of that very quickly, she turned to the very people who had already had their hearts stolen by the amazing animal. She made a Facebook post asking for suggestions for a name, then narrowed them down to the best of the best before finally letting the public choose.

Once all the votes were in, the name that the Facebook group chose was, “A Dog Named Journey”. And, Journey is the perfect name for such an amazing animal, who badly injured and dying of starvation, set upon an epic quest to find a hero. Then, nearing his final hours, in horrible pain and after being terribly abused, Journey not only finally found his hero, he found a whole darn town full of them!

You can follow Journey’s journey with Cheryl and the amazing people who helped save him at https://www.facebook.com/groups/1442870326024645/ 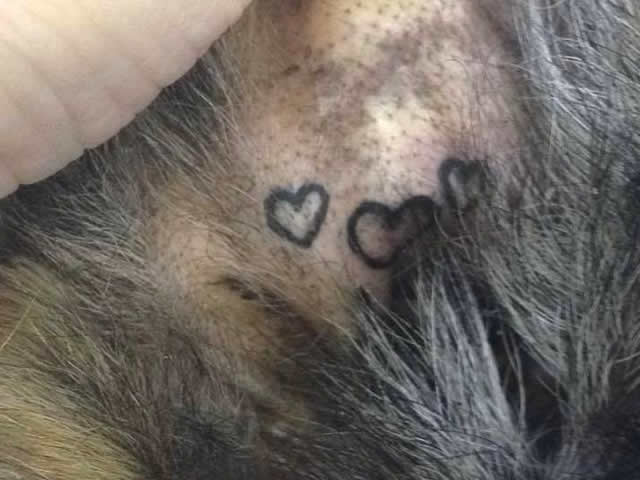 I got a special addition to my tattoo from the vet! 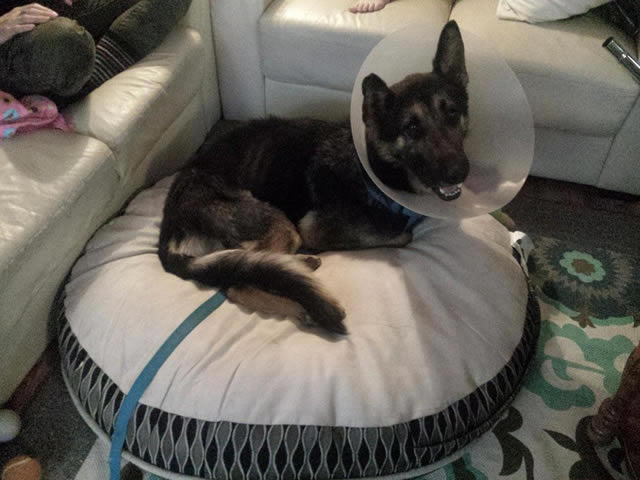 The generosity from the community was overwhelming. Thank you Amber for my new bed. As you can tell by my smile, I love it! 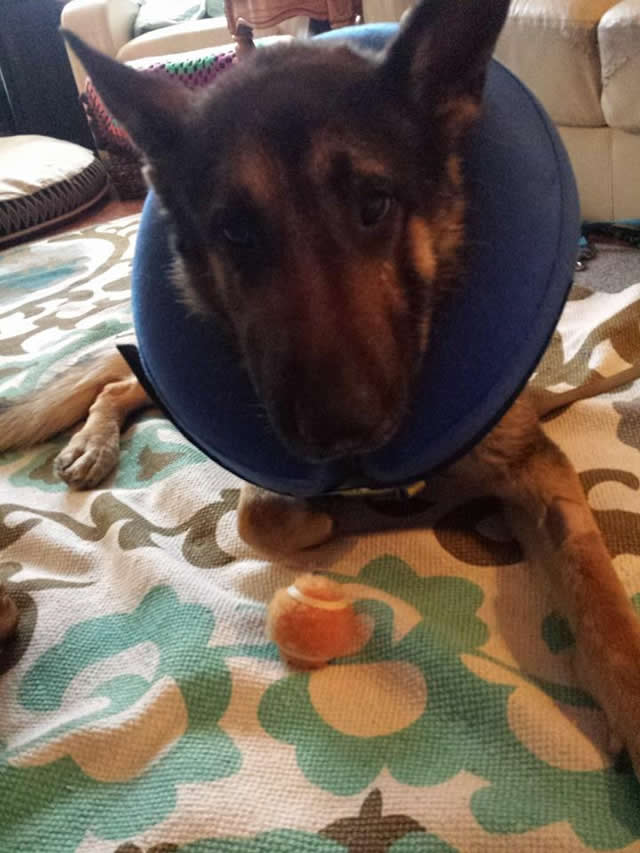 Not quite ready to play ball yet, but with Cheryl’s love and support I will be soon!

Zoey was a five pound long haired Chihuahua, which might …

Life Is Real One early morning when there was a …