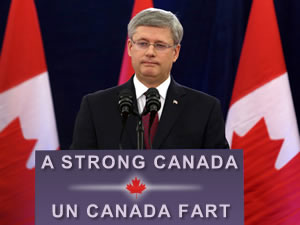 Former Canadian Prime Minister, Stephen Harper, was less than amused when reporters laughed hysterically as he stepped up to the podium to address an international press conference. Apparently a Quebec graphic artist, Luc Warm, had prepared what was supposed to be a bilingual podium facing, and used a spelling error to make what many in Quebec feel was an accurate political statement.

An exhaustive international manhunt was launched for Warm, who’s believed to have fled for the tropics. Luc is described as 5 foot 10 inches tall, has dark hair, brown eyes, weighs 175 pounds and is best recognized by his sense of humor. The public is asked to report anyone fitting this description, anywhere in the world, in order to bring this prankster to justice. An inside Ottawa source said that Harper was simply fuming, and that Warm’s sign should have been being considered the same as an assault, such as when a cream pie thrower assaulted another prime minister.

The Canadian prime minister’s actions had many in the legal community concerned, as they could have set legal precedent for graphic artists to be considered domestic terrorists. The Canadian Society Of Potty Mouths was outraged, and demanded Harper’s ‘witch hunt’ be immediately called off, claiming that his actions only reinforce the world’s opinion that Canadians lack any sense of ha ha.

In a day and age when science does incredible things, …

T’was Was The Night Before Halloween… Okay, I venture into …