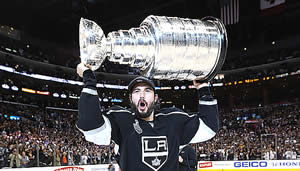 Donated by the Governor General of Canada, Lord Stanley, in 1892, the Stanley Cup has the names of every team (and almost all of the players) who have won it engraved upon it.
The first to win the cup was Montreal’s Amateur Athletic Association hockey club in 1893. No other sports trophy boasts the history of hockey’s Stanley Cup. It’s the oldest trophy that North American athletes compete for, and is awarded to the winner of the National Hockey League.

The Cup also has something else that sets it apart from the other awards, because members of the winning team can take the Cup home with them. Most of the time, the Stanley Cup is treated with reverence, but boys will be boys, so accidents do happen. Of course the Cup gets paraded down Main Streets, but it’s also the guest of honour in man caves, at backyard barbecues, weddings, and celebrations at local pubs. It’s been used as a baptismal font, a flower pot, a urinal and toilet. It’s been in strip clubs, used as a dog food bowl, traveled by dogsled, eaten from by a Kentucky Derby winner and misplaced by airlines.

It has shared a bed with a hockey player and his wife, and a birth is said to have resulted from a wife kissing it. It was drop kicked into Ottawa’s Rideau Canal (fortunately the canal was frozen solid). It was stolen from a photographer’s home in 1907 and held for ransom. The thief returned it when no one showed interest in its return. In 1924, the Montreal Canadiens left the Cup in a snowbank, and it has even gone swimming. While other sports awards sit in dimly lit stuffy halls, hockey’s Stanley Cup, is the peoples’ cup.

True Or False? The Lord Stanley Cup was left in a snowbank.
TRUE

Stop being so serious and read something that will bring …

Men and women speak different languages, and relate differently to …