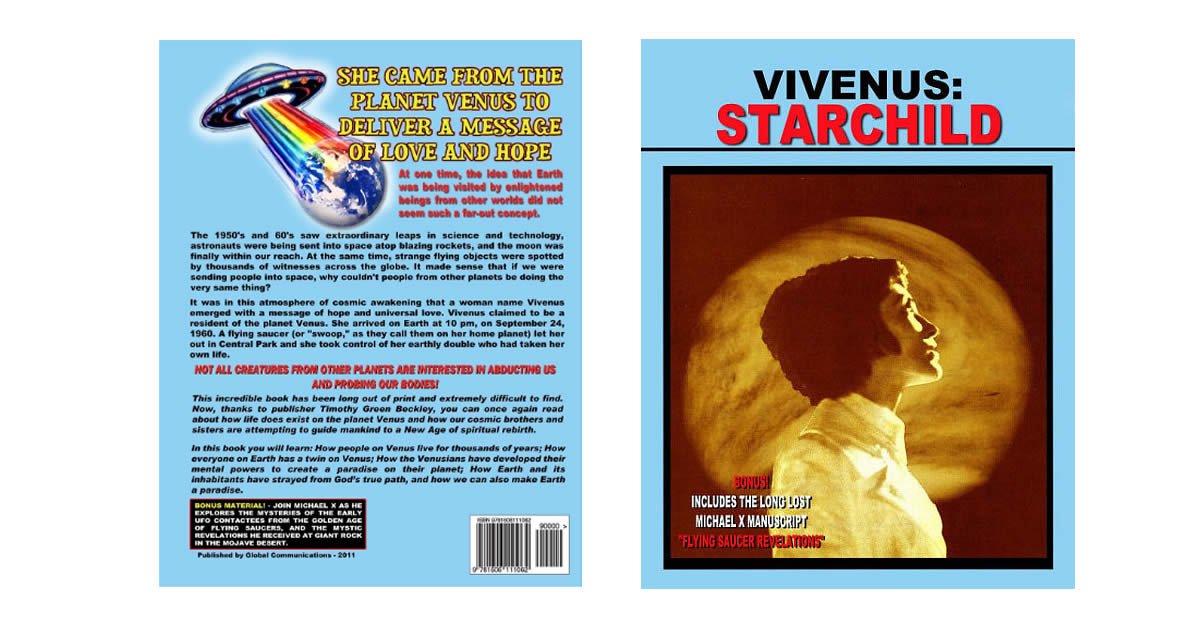 The Mystery Of Vivenus Starchild By Ron Murdock

A few years ago I’d written an article for UFO Digest about a woman supposedly named Vivenus Starchild. And her story’s one that I’m still skeptical about to this day. It would have been interesting to have a face to face conversation with her to find out what she was all about. The mysterious question about her was whether Vivenus was from Venus, or she’d invented the story to promote herself.

I first heard about Vivenus just prior to the National UFO Conference that met in New York City on June 24, 1967. Starchild was a guest on the Long John Nebel all night radio show on WOR radio. Her story was that she’d had left her old body on Venus and flew to Central Park in New York City, where she left the space ship she’d travelled here in. Does anyone remember this landing being reported? Soon after arriving on Earth, Vivenus apparently entered the body of a failed folk singer. It was said that even relatives of the folk singer couldn’t tell the difference between the two after Vivenus overtook the body.

Starchild’s message was much the same as the others in the 1960s who were saying, peace on Earth and love your fellow man. Enough Earthlings were basically already saying the same things, so why did we need someone from Venus proclaiming to be the bearer of glad tidings?

After leaving New York City, Vivenus traveled across the USA to spread her interplanetary musings. A few people wanted to read what Vivenus had to say, but she found it hard to put her story down in words. I can’t say if her story was published in book form or not.

I couldn’t take her story seriously, as Vivenus couldn’t prove her origins from Venus, or that what she shared with others was true. So, how can we find out if what Vivenus said had any substance or merit? Looking into her, I discovered that Starchild claimed to have run for President of the USA. I think it was the 1968 election. Her slogan was ‘It’s not odd to vote for God.’ I did look up the election results for that year, and a few thousand votes were cast for ‘unspecified candidates’. Vivenus Starchild may have had been one of them, if she’d actually run.

After a number of years Starchild stated that she felt indifference coming from those she met up with. She started to struggle after feeling fear, mistrust and rejection from so called friends of hers when relaying her message.

Eventually Vivenus disappeared without leaving a forwarding address. She did have her mail delivered to a Florida postal box which allegedly was collected every so often. But the time came when even die hard believers put the incredible tale of Vivenus behind them. I have no idea if she’s even alive or dead. To my knowledge, the whereabouts of the mysterious Vivenus Starchild remains unresolved.

I like Occam's Razor, it goes that if you have …