Transformers: Age of Extinction is not an improvement on the last 3 Transformer movies. It is not even better than the second or the third movie.

It runs for way to long, has too many idiotic and infuriating moments in it, and it wastes so much potential that after seeing this movie I refuse to see any more. But enough of my ranting, here’s what the movie is about.

After the battle of Chicago Transformers are considered public enemy number one. The public is encouraged report on any alien activity as the Autobots are on the run. They are being hunted by a CIA taskforce named Cemetery Wind that hunt them and kill them for spare parts. There is a conspiracy involving an arms manufacturer and a CIA agent who want to use the Transformers for their own ends. This leads to a struggling inventor, and single father, who finds a beat up truck that ends up being a heavily damaged Optimus Prime. Together they are thrust into the conspiracy that could doom the entire human race to extinction.

The plot synopsis I just presented sounds very appealing doesn’t it? A Transformers movie going in a dark direction with 9/11 parallels running alongside it. That does sound good. Unfortunately it is not. This movie still has Michael Bay at the helm and his specialties are not subtly and nuance. He is big, he is loud, and he is simple. He is not interested in making his films complex. He wants to make them as simple as possible to be able to appeal to the widest possible mass audience. Things that I could have enjoyed immensely like the Dinobots don’t show up until two hours into the movie. Even after that they are still wasted because they don’t speak (and pterodactyls do not have two heads!). They only really enjoyable part of this movie for me was Mark Walhberg whose character I hated but acting I liked. Unfortunately other actors like John Goodman (voice of the fat bearded Autobot Hound), Ken Wantanabe (voice of the Samurai Autobot Shift), Stanley Tucci (playing an exaggerated caricature of what people thought Steve Jobs was really like), and Kelsey Grammer (as the head of Cemetery Wind) are all wasted in this movie.

Nostalgia carried me through 4 of these movies. I enjoyed the first one but every movie since then has not been enjoyable for me. Nostalgia is not enough anymore. The Transformers can be so much more. They just need to start over without Michael Bay or any of the other people attached to this garbage. Except Peter Cullen (voice of Optimus Prime) and Frank Welker (voice of Megatron/Galvatron). They can stay.

I give Transformers: Age of Extinction 3.25 Future sounds out of 10

Clifford T. Hofferd is a University Graduate living in Prince George. You can read his blog at thengpblog.blogspot.ca 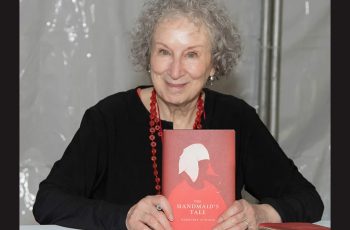 The Handmaid’s Tale by Canadian author, Margaret Atwood, is a …