By The Way… Essays And Atavisms

I recently found myself lost a book I recently received called ‘By The Way… Essays And Atavisms’ by Dereck Sale. Not lost in the sense of bewilderment, but as in ‘immersed’. My fascination was twofold; first was the realization that at any given time, and at any given location anywhere in the world, profound thought exists profoundly; and second, by the geopolitical insight that this book contains. “By The Way… essays and atavisms”, written by author Dereck C. Sale and published by Trafford Publishing, is a collegial collection of recollections, reflections, and projections. 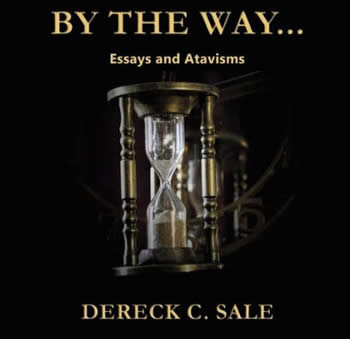 A Tapestry Of Thought Wonderfully Woven

By The Way… is a tapestry of thought wonderfully woven with strands of political outrages, observations and evaluations, social justice, economic injustice, compassion and rock solid logic. It is page after page of astute perception; a volume of vanity, wisdom, rebellion and solutions. It raises questions that are sadly seldom asked, and provides pertinent, sometimes almost prophetic answers. Dereck Sale personifies the finest that philosophy has to offer as he shares the inner workings of a marvelous mind.

Dereck’s creativity and craftsmanship exemplify his remarkable ability to reach into space and time to grasp a thought, then hold it forth like a firefly on a warm summer’s night. With almost arachnoid ability he then linguistically weaves it into a wise and often whimsical web of words, which once a reader sets thought upon, they find themselves hopelessly, but willingly ensnared. Like a skilled sculptor he chisels mass into a masterpiece, and like a seasoned sailor, unknots the horribly knotted.

By The Way… Essays And Atavisms

“By The Way… essays and atavisms” is an autobiographical glimpse through the fence into the insane asylum the world has become, a self-described “potpourri of vanities”, the journal of a time traveler who’s rooted in the present, but is gifted with the ability to see into the future. By The Way… is a wisely written mural of culture, religion, power, oppression, progression and introspection, loomed by a remarkable soul with remarkable skills.

Dereck C. Sale’s compilation, By The Way… essays and atavisms, is a book that’s certainly well worth a look, and in my opinion, should be required reading at both college and university levels of education.

By the Way… Essays and Atavisms Kindle Edition Hardcover/Softcover

I give By The Way… five out of five bookworms.