Native Americans called Glastenbury Mountain in Vermont’s Green Mountains “cursed”, and used it strictly for burying their dead. And it turns out that they had good reason to fear the mountain. Over the years there has been between 30 – 40 unexplained disappearances of people. People who have never been found. The trails stop part way up the mountain, suggesting that no one ever goes up any farther. But as strange as the disappearances are, when you walk into the forest that blankets the mountain the silence is deafening. There are no birds singing, no squirrels chattering or crows cawing. In fact, you hear nothing but your own heartbeat. It’s as if the animals sense something and never enter.

The community of Glastenbury is an unincorporated, mountainous town in Bennington County with only eight residents. But it wasn’t always this small. A small charcoal-making industry and a logging railroad operation were a boon for a brief time after the Civil War. The town included a post office, small houses and school, and its population peaked at 241 in 1880.

Two murders in Glastenbury – one in the settlement of Fayville in 1892, and the other in Glastenbury’s Bickford Hollow in 1897 – was the start of Glastenbury’s long decline, and the beginning of its lasting reputation as a mysterious, remote and haunted place. A reputation well earned because of its share of bad luck. After its logging and mining days, South Glastenbury was briefly transformed into a trolley-equipped summer resort, with the old loggers’ boarding house becoming a hotel, and apartments being renovated into a casino. But after being open for just one season, flooding in 1898 washed out the railroad tracks beyond repair, and the resort was abandoned for good. Three decades later in 1937, the state disincorporated Glastenbury and nearby Somerset because of their extremely small populations.

Then, in the late 1940s and early 1950s, mysterious disappearances began being reported in the area. Disappearances of people like Middie Rivers, a lifelong area resident and experienced hunting and fishing guide, who led a group of hunters into the wilds of Glastenbury Mountain in early-November, 1945. The weather was so mild that it was hard to believe that Thanksgiving was only two weeks away. Rivers was 74, but his excellent health had been confirmed by a recent physical. Returning to camp for lunch, Rivers split off from the group at an area known as Bickford Hollow. He was never seen again. In spite of massive search efforts, only one clue ever emerged; a lone unexpended bullet – believed to be from River’s bullet belt – lay on the banks of a nearby creek. After more than a month searchers reluctantly gave up the hunt. In the deepening twilight as they headed for home, the season’s first snow began to fall, and no one ever heard from Middie again. 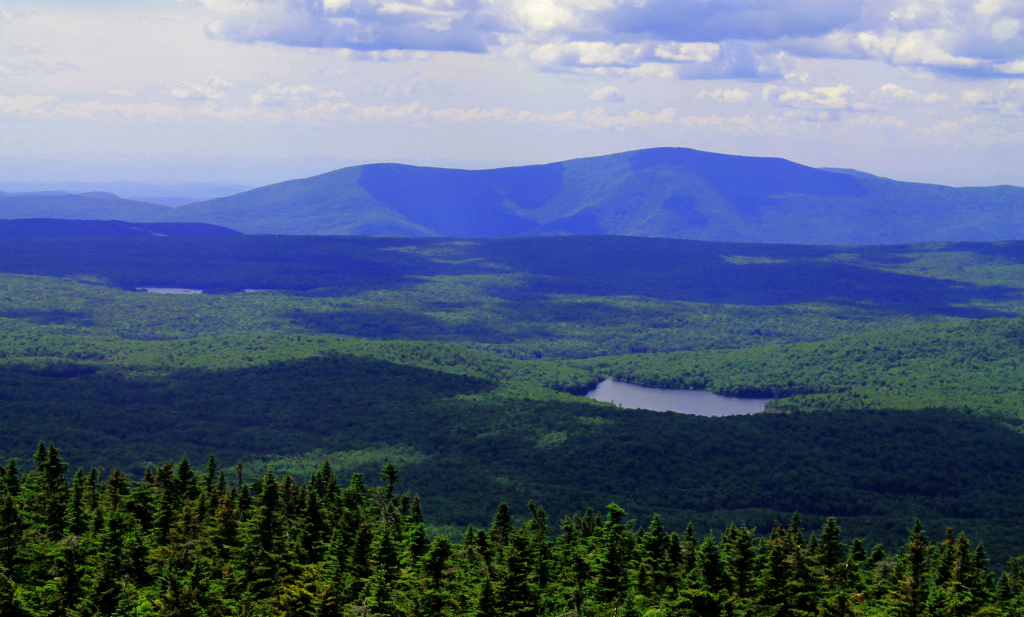 The following December, a Bennington College student – 18 year old Paula Weldon, a native of Stanford, Connecticut – decided to stretch her legs on Glastenbury Mountain’s Long Trail. Donning a fiery-red jacket, the bright and spunky five-foot-five blond left the college. A local resident gave her a ride as far as to his home in Woodford Hollow. Later in the afternoon she asked directions from Ernest Whitman, an employee of The Bennington Banner Newspaper. Other trail hikers would say that Weldon waved to them on her way up the trail.

On Monday, when she hadn’t returned to school, all hell broke loose. A grim-faced Vermont Governor, Ernest Gibson, reached for the phone. Soon the FBI, along with New York and Connecticut State Police, joined Vermont authorities in the hunt. Immediately a $5,000 reward was posted. A clairvoyant was even brought in. The search team, which numbered more than 1,000, began to scour the 27,341 acres of mountain wilderness. In the days that followed, the ghostly silence was shattered by packs of baying bloodhounds, shouting searchers, helicopters pounding across the sky and droning search planes criss-crossing overhead. Every square inch of the mountain was searched and re-searched, Daily the headlines of The Bennington Banner screamed for anyone to come forward who might have any information. But, no one ever did, and not one clue was ever found.

Three Decembers later – to the day – James E. Tetford vanished somewhere on the sinister slopes. Tetford had spent a holiday with relatives in northern Vermont. His family had put him on a bus for the return trip to the Old Soldier’s Home in Bennington. The bus only made one stop, where Tetford’s presence was noted. Only Glastenbury Mountain stood between him and his home. When the bus arrived in Bennington, Tetford was gone. The dumbfounded driver could offer no explanation. In spite of another massive search, narry a trace of Tetford was ever found.

Ten months later, the mountain claimed a child. Paul Jepson, 8, uncharacteristically jumped into the family’s truck with his mother for a trip to the town dump near the mountain. Once there, Mrs. Jepson left the truck just for a moment. When she returned, Paul was gone. It was mid-afternoon on a bright and clear Columbus Day. Mrs. Jepson searched frantically, but couldn’t spot his bright red jacket. Civilian and military searchers were brought in. But just west of Glastenbury Mountain, at the intersection of Chapel and East Roads, the team of dogs provided by New Hampshire State Police lost the boy’s scent. It was at the exact spot where Paula Weldon was last seen years before. Paul Jepson Sr. would later comment that he found his son’s unusual yen to go to the mountain baffling.

Many more people have been reported missing on Glastenbury since. Local residents have reported strange, unearthly sounds, and strange glowing discs on and above the mountain. Glastenbury mountain, according to Joseph A. Citro, in his book “Passing Strange Tales of New England Hauntings and Horrors”, is “an inaccessible region, remote, full of dark places, jutting outcrops, vast marshlands and quiet pools”. There have been theories that Glastenbury Mountain acts as an energy vortex, or exists in an alternate dimension. There’s also a story about a cursed boulder that swallows hikers into a bottomless pit, and a tale about a monster who lives in the woods. The area has been dubbed “The Bennington Triangle.”

There are abandoned settlements (aka: the ghost towns of Fayville and South Glastenbury), and oddly, there’s a large stone cairn near the summit of Galstenbury Mountain to guide hikers above treeline during foggy weather. However, since the summit is completely forested, and there are no other rocks on the mountaintop, there’s no rational explanation for how or why the rocks are there. Some speculate that humans must have hauled rocks up there to build the mysterious cairn. Others claim it was something or someone else.

All that anyone knows for sure, is that there are ancient indigenous burial grounds, mysterious disappearances, UFO sightings, a cursed forest, and paranormal activity. In fact, in Glastenbury, the legendary stories seem to far outnumber the area’s population. For those who are drawn to such areas, hiking to Glastonbury begins as a 22.3-mile, two-day hike. But be forewarned that for some the hike has taken much, much longer. Years and years and years longer. If you still insist, follow Route 9 east to Woodford for 4 miles, then bear left on Harbour Road. Travel 5 miles to a parking lot entrance on the left, which brings you to the crossing point of the Long and Appalachian Trails. Be sure to have all of your personal affairs in order, and inform people of when you’d hope to return.

In reality, actually how bad is Glatenbury? Well, in the travel brochure, ‘Towns And Villages’, one paragraph was devoted entirely to Glastenbury Mountain. And the last seven words of the paragraph read: “… we don’t recommend you make the trip”.

Kemorovo, Russia, also known as Kuzbass by the locals, is …

Random jokes, questions and quotes to broaden your knowledge, and …