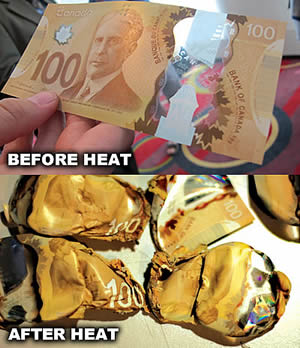 Do you prefer paper or plastic?

You go to the bank, withdraw ten new Canadian one hundred dollar bills, and later leave your purse in your car. It’s hot enough to be bootcamp for Hell, so when go to fill up with gas on the way home, and pay for it, you pull out a worthless, melted glob of plastic that’s barely recognizable. Why? According to various reports, Canada’s new ‘indestructible polymer bills’ shrink under intense heat, such as in a car on a hot day, or when placed next to a heat source.

Yep, while the old paper bills could withstand washing machines and dryers, it turns out that Canada’s new $100 bills can’t stand the heat after all, and though “…you can’t rip them, you can’t tear them, you can’t wreck them by washing them, but you can heat them and melt them,” said an anonymous banking industry source. In fact, under the right conditions, they curl up like straightened hair on a rainy day and become as worthless as a politician’s promise. The only way a person will be reimbursed, is if they have the bill’s serial number.

Julie Girard, a currency spokesperson for the Bank of Canada, told the Toronto Star, “The Bank of Canada cannot rule out that polymer notes may be damaged under certain extraordinary conditions.” But, how is it that even possible, given that the Bank of Canada says it rigorously tested the new longer lasting bills in extreme heat (140°C), and extreme cold (-75°C) temperatures? The Bank of Canada says the new polymer $100 bills, introduced in November of 2011, underwent ‘scientific’ tests to make sure they withstood various conditions. The polymer $50 bills were introduced earlier this year, and to date, there have been no reports of difficulties with them.

But Brittney Halldorson, a teller at the Interior Savings Credit Union in Kelowna, B.C., says that she’s heard of cases where several of the bills have melted together inside a hot car. A Halifax man reported that he’d laid his wallet on a toaster oven, and after toasting a bagel, noticed that three $100 bills were transformed into the shape of a “Coke bottle.” The Cambridge Times did an article in January about a man who left eight $100 bills he had received as a Christmas bonus in a tin box near a heater, only to discover a day later, that they had shriveled up.

The new $100 bills cost 19 cents each to produce, which is almost twice the price of paper bill, but are claimed to last 2.5 times longer than the paper counterparts (approx. 19 years), and are resistant to tearing and water damage, with hidden security features, including transparent holograms, making them difficult to counterfeit – that is, when not melted into a useless blob of plastic that looks more like it belongs in diapers than in cash registers.

In a risky marketing move, Blind Chic’s released its Scumbag …

Jokes to make you laugh out loud, quotes to expand …