There was once a selfish old man named Abe, who’s life was bitter and lonely. One day as he was walking through the park, he saw a sad little girl sitting all by herself on some stone steps. Everyone passed right by her, never seeming to notice her. No one stopped to ask if she was okay. She was dressed in a little blue top, dark colored shorts and was barefoot. She just sat there never saying a word, while looking terribly, terribly sad. But selfishly, Abe had things to do and places to go, so he couldn’t bother himself with her troubles and went about his business. 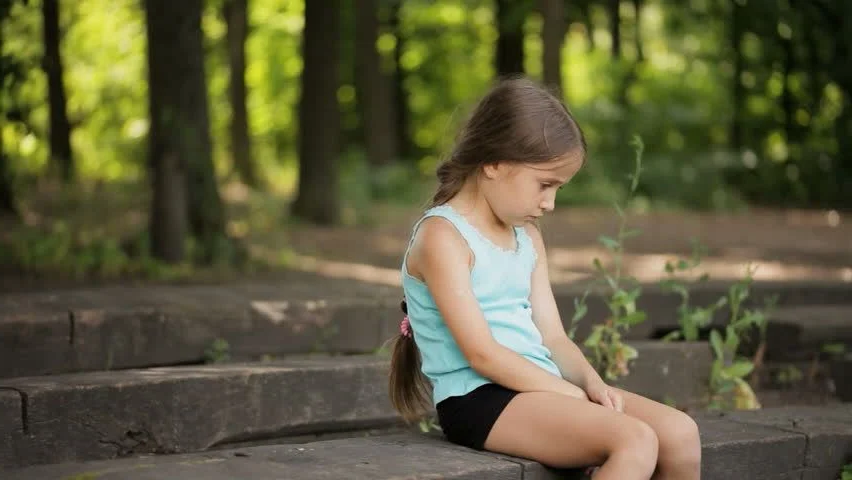 But the sad little girl’s memory bothered Abe so much for the rest of the day, that he decided he’d go back to the park to see if the little girl was still there the next day. And she was. She was dressed the same, sitting the same way in the same spot, and with the same terribly sad look in her eyes. It was only as he approached her that he noticed that the back of her top was covering what appeared to be something grotesquely misshapen. He figured that her deformity was the reason people had made no effort to speak to her. As he neared her, the little girl stared only at the ground.

Smiling to let her know it was okay; that he meant no harm and was there to help, he sat beside her and said, “Hello.” The little girl appeared shocked, and after staring deep into his eyes with almost disbelief, stammered, “Hi!” He smiled again, and she shyly smiled back. He asked what her name was, and why she was so sad. She looked at him with tears welling in her eyes and lips quivering, saying, “My name’s Hope, and I’m sad because I’m so different.”

He quickly said, “Oh sweetie, yes, that you are. For you’re truly a precious and beautiful soul!” She looked at him with shock and asked, “Really?” And feeling a love that he’d never felt before, he smiled with both his lips and heart as he said, “Yes, sweetheart. I believe you’re a beautiful little angel.” Once again she asked, “Really?” Then as he shook his head yes, she stood and continued with, “Well, I truly am angel Abe. In fact, I’m your guardian angel.” And as she spoke, she smiled beautifully as her dress began to glow a brilliant white, and glorious glimmering and shimmering wings unfolded behind her.

Seeing his confusion, she said, “I’ve been watching over you for your whole life, and finally Abe, you’ve thought of someone other than yourself. Now my job’s done, and I must be moving on.” But Abe jumped to his feet and said, “Wait! Why didn’t anyone else ever stop to help you?” She smiled and said, “Because you were the only one who could ever see me Abe,” and
vanished. And as she disappeared, so did Abe’s selfishness, changing Abe’s life, and that of many others because of him, in truly wonderful ways.

The moral of this story is that often the most beautiful things go unseen, not because they cannot be seen, but rather because people simply choose not to see them.

Fable written by Will Lewis

Flames of Misfortune By Robin Lindzer Kelli Cook wiped her …

High school is a regretful place. So, I guess it’s …