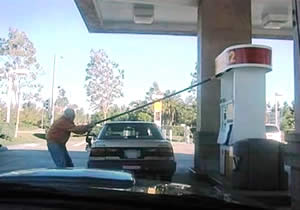 It was a clear, cool morning May 22nd, 2006, when a small gas station in South Dakota burst into a massive ball of flames. By the the time the volunteer fire department assembled, and drove the tractor pulling a water tank into town, there was only the smoldering remains of an import car, the cash cabin and a collapsed roof, among blackened concrete pillars, walls and melted metal.

Unfortunately, the attendant perished in the fire, and due to the extend of the damage, there was no video surveillance to review. The burned out vehicle was registered to 74 year old Harold Greenburg, who police failed to locate. The cause of the tragedy was not discovered until years later, in a local garage sale!

Henrietta Houser had been out for a stroll one morning, when she noticed a garage sale happening a couple of blocks from the station’s former location. Browsing through clothing, books and knick knacks, she came upon a box of old movie tapes. Most were in their original boxes, and being old school, Henrietta still had not upgraded to a DVD player. She purchased the whole box for a dollar, took it home and forgot about it for over a month.

Then, one evening she popped some corn and settled in to watch one or two. Lying on top of the boxed tapes was a blank one. She put it in to see what was on it. She was puzzled as it seemed to be taken by a security camera at a gas station. She became engaged when she realized the attendant opening the place was the one who had died in the fire years before. She watched as an older gentleman driving an import car pulled up to the self-service pump. Placing a credit or debit card into the pump, he entered his info, selected his grade of fuel and then attempted to put the nozzle in his tank.

When he realized that his gas tank was on the other side of his car, he decided to ‘stretch’ the hose to make it reach. Another vehicle approached just as the hose decided not to stretch, and instead, pulled out of the pump, allowing fuel to gush forth like blood from a deep arterial wound. As the newly arrived vehicle sped backward, it’s tire threw a small bolt that had been caught it its tread toward the pump, striking it and causing a tiny spark. The spark caused a massive explosion that blew the old man into an adjoining field and the images ended with a white static filled screen.

After the police watched the tape, they began to search the field next to the former station, and there discovered the skeletal remains of Harold Greenburg. His family has since been located and notified, and are now making arrangements for his transport home.

Dink Shrinking Popular With Children While shopping the other day, …

Is Railroad Safety Being Forgotten? Ii would appear that rail …