It’s amazing how something as harmless as a little prank can involve changing a military base’s policy and may affect national security.

But it can, and it happened to me.

The Spring of 1994 found me at Sheppard Air Force Base, Texas, driving around my nice shiny patrol car, complete with a new, straight out of the box radar gun and myself as a young rookie with a shiny Air Force security police badge and a book full of speeding tickets to write.

Then the radio cackled and it was the dispatcher informing me I needed to go to our off-base housing area to check identification cards for one hour before resuming patrol.

Rats. Tickets would have to wait.

So, I parked my car and went to the housing gate and began to check IDs.

We only manned it for a few hours every night, as this was well before the time of people getting the crazy notion of flying airplanes into buildings.

About an hour into the mundane ID checking, a small orange kitten started to cross the road in the middle of traffic.  Not wanting the critter to get ran over, I stopped the approaching car short of my post, darted out into the road and scooped up the cat. I then went back to where I normally stood and motioned the car I had stopped to proceed forward. Small, mewling cat in one hand held next to my gun belt, I checked the person’s military identification.

“Lose your cat, son?” asked the captain with a silly smirk on his face.

I don’t know where the inspiration came from, but for some reason I couldn’t let his smart aleck question go so I blurted, “No, sir. This is actually the latest tool in law enforcement we‘re testing. It’s a narcotic sniffing cat. He was just over in the grass there using the bathroom before I put him back on the job.”

The look on that guy’s face was priceless.

“Really? They have them in cats now?” he asked.

“Oh yes,” I continued, as I stuck the captain’s military ID card up to kitty’s nose. The cat, incidentally, did what any animal will do if you stick something in its nose.

“You see, sir, this cat is trained to detect all kinds of common illicit narcotics,” I said with the straightest face I could manage. “Basically, if he alerts on your ID card that indicates to me you may have recently handled illegal drugs. After all, your fingers were on your identification before you handed it to me. That gives me all the probable cause I need to place you under apprehension and tear your car apart looking for more drugs.”

He was clearly impressed. He thanked me and drove off.

I couldn’t believe it. So, I figured I’d have a little harmless fun until it was time to quit the gate and jump back in my patrol car. My new found furry partner and I would “check identification for drug residue” for a while and then I’d take him to the stray animal place myself.

That night I told more downright lies than a single military guy does at the local bar after a long deployment and trying to pick up a girl.

“No, ma’am, I can’t let you pet him. I’m the only person allowed to handle him. The military police animal training folks in San Antonio said he has to bond with me.”

Every time someone had a question, I came up with some great answers any silver-tongued politician would’ve been proud of.

“I’ve been in the military almost 20 years. How come I’ve never seen this before?”

“Well, major,” I said, “it’s part of a new experiment the Air Force has implemented. “There’s only a few to see if they’re cost effective … I believe at last count I have one, some guy at Pope Air Force Base, N.C., has one and there’s another at Arnold Air Reserve Base, TN.”

“Awww, he’s so cute. Do you get to take him home after work?” This was from a car full of girls about my own age.

“Actually, I sure do. It’s one advantage I have over our K-9 cops. They have to put their dogs in the military working dog kennels when they’re off duty.”

Then I leaned forward and gave my best stage whisper to the driver, but loud enough to ensure the entire car full of co-eds could hear.

“And don’t tell anyone, but the training they made me go through dictates he has to sleep with me so we become close because cats tend to be fickle. I’d hate for everyone know a cop goes home and sleeps with his cat.”

Yes, I got the driver’s number and later, one of the vehicle occupants swung by the gate by themselves to see my feline partner and I, coincidentally, got her number too.

I was thinking of somehow hiding this fur ball in my dorm room at this point.

Here’s another one: “Well, that’s all well and good but can’t your guys that have the police dogs use them to attack bad guys?”

“They do, sarge, but that’s actually something we’re working on too. Pretty soon General here and I go back to San Antonio for phase two of our training. What the animal behavioral scientists have worked out is for me to give him a code word, he’ll extend all of his claws on each of his paws and then I’ll fling him in the suspect’s face. That gives me time to draw my weapon while General distracts the bad guy.”

The good sergeant agreed that was a pretty good idea and drove off.

Yes, I had named my impromptu partner and crime fighter General. I really liked the fact he had a title that outranked everyone else on Sheppard Air Force Base.

I happily told passing motorists about General, the drug detecting cat, and I the rest of the time we spent at the gate. When my relief sentry showed up, I put General in the front seat of my patrol car and drove off. At that point, I didn’t have the heart to take him to the stray animal facility. I took him back to our squadron and, as luck would have it, one of the single girls that had her own apartment downtown was looking for a pet. She liked General and adopted him that very evening. She took him home and thus, a happy ending to the story.

Two days later into my three days off, the phone rang very early in the morning. The squadron operations superintendent, the guy who’s basically in charge of all the shift working cops, said he needed to see me.

I got dressed and went to his office. He had a great story to tell.

It turned out; one of the countless people I had told my drug detecting cat story to was a young lieutenant who was a friend of some captain. They discussed General over their weekend golf game. This captain, much to my bad luck, was the executive officer for one of the senior leaders on the base.

Basically, his job was to make coffee for his colonel.

The coffee making captain had mentioned to his boss this great invention the cops were trying out in the form of a drug detecting cat. The colonel thought this was so cool he called our squadron commander and mentioned he’d like to hear how this new innovative crime fighting tool worked out.

Our squadron commander said the usual “yes, sir’s” and “of course, sir’s” and when he’d hung up the phone immediately started asking a ton of questions to his staff in the squadron.

What the hell was a drug sniffing cat? Where did we get one and why, for the love of all that’s holy, wasn’t he informed?

A few hours later, the operations superintendent heard a rumor of my exploits and that’s when he’d called me.

I went to his office and told the whole story.

I thought he’d kill me right there.

Instead, the old senior non-commissioned officer laughed and said it was the funniest thing he’d ever heard. He called our commander and said, “Basically, what happened here, sir, is that our young man was trying to pick up a girl.”

Not entirely true, because I was just having a blast messing with the populace; but hey, whatever gets me out of hot water, right?

Our commander, in turn, called the colonel and explained the circumstances.

Then, he walked into the office I was sitting in.

“The colonel to tell you just pretend you’re a pilot like everyone else does to pick up  girls,” our major said, with a smile. “He said he can deal with that but he doesn’t know how to handle supposed drug detecting cats. He thinks it’s bad for national security. And his new directives are ‘you will stop messing with the public.’”

Incidentally, General is still doing very well, is very long lived for a cat, and has traveled the world with my co-worker that adopted him and with the man that eventually became her husband.

Now I stick with telling girls I “flew –M-16s, which is a prototype combination jet/submarine.”

Zombie is a word that has become synonymous with staggering, … 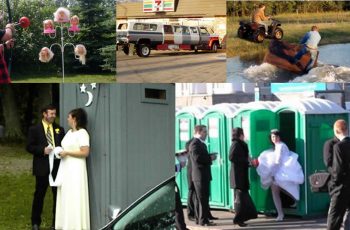 Redneck Wedding Pictures For your viewing enjoyment we’re sharing our …