The next time that you get to thinking about getting naked, going outside and trying to pet a strange dog, you may want to think back on the following story. After consuming a ‘quantity’ of alcohol, a 64 year old Dominican Republic man woke to find himself in the hospital. Well, at least most of him. Imagine his surprise when he woke up to find out that he was missing his penis. 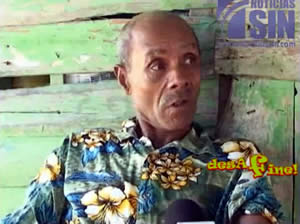 In an interview with TV station, Noticias Sin, Geraldo Ramos (seen here) said that he woke up with no penis after blacking out drunk the night before and didn’t have the slightest clue how it had happened (the missing penis). Ramos said he simply cannot recall the point where he went from being very inebriated, to getting rushed to the hospital for emergency surgery on his dismembered “member”.

Neighbors, however, were able to bring a little light onto the matter. They claim that a drunken, naked Ramos approached a dog and it attacked him. They didn’t explain why Geraldo approached the animal (or vice versa), or what his intentions were, but apparently the animal found his actions alarming enough to try to remove Ramos’s ability to ever breed again. Despite a grueling search, which spanned almost 15 minutes and involved a police officer, a cigarette, a bicycle, three kids and two disinterested grandmothers, neither the dismembered member or the canine allegedly responsible for dismembering the member has ever found.

Okay, just how much alcohol did the inventor of the …

Sure, pets are cute and cuddly, but not all the …