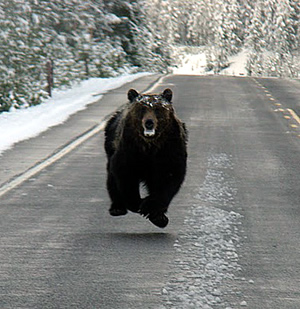 Sometimes being prepared literally makes the difference between life and death. The following is a story of amazing self-control and marksmanship. It all began one blustery spring day in British Columbia, Canada, when a 5 foot one inch, 97 pound woman was pitted one of nature’s largest and fiercest predators. Anita Blackhawk loved to hike. She lived just two hours away, and knew that the Canadian wilderness could be harsh and unforgiving, so she had prepared herself for almost any contingency. That included ‘personal protection’. Not the kind of person to want pack around a huge revolver, Anita did her research and purchased a Beretta Jetfire, one of the smallest calibres that still provides ‘adequate’ personal protection.

On this particular day, Anita and her boyfriend, Jack, were out hiking in near Mount Robson, BC, when they were attacked by a grizzly bear. Unsure of what had provoked the attack, Anita later told reporters, “I was on a hike with my boyfriend, and we had just come to a point where the trail double-backed over the highway. Just as we got up onto the road, we were surprised by a huge grizzly bear charging at us from out of nowhere. She must have been protecting her cubs or something, because she was extremely aggressive. As the bear lunged toward us, it was as if time stood still. Jeff screamed as he turned to run, and I drew my little pistol, aimed and fired. I swear that if I had not had my Beretta Jetfire with me, I would not be here today! Just one shot to my boyfriend’s knee cap was all it took. The bear got him, and I was able to escape simply by walking away at a brisk pace. It’s now one of the most prized pistols in my collection…”

In order to assist you in giving your cat a …

Cairo is a purebred Belgian Malinois, a shepherd breed that …