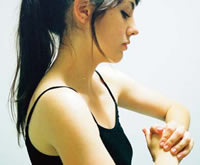 False: There is no good evidence that cracking ones knuckles leads to, or causes arthritis. However, there can be too much of a good thing. Cracking your knuckles may not lead to arthritis, despite what your mother told you, but scientists have discovered that it can cause tissue damage in the affected joints.

In a study of 300 knuckle crackers, it was found that their peculiar habit did not lead to arthritis, but the respondents did suffer some damage to soft tissue and also experienced loss of grip strength. However the damage was minor. Other side effects of knuckle cracking can include damage to ligaments surrounding the joint, and the dislocation of tendons.

There Is No Scientific Evidence That Cracking Knuckles Leads To Arthritis

The most probable reason why knuckle cracking is linked to arthritis, may be because of the noise produced when you do it. What’s really happening when you “crack” your knuckles is that you are either pushing the joint in, or out, of its normal position. Joints are the meeting points of two separate bones which are held together by connecting tissues and ligaments. A thick, clear lubricant (made mostly of carbon dioxide and nitrogen) called synovial fluid is found between the bones. When you stretch or pull your finger to get that desired popping noise, you are causing the bones to pull apart. Pressure is suddenly reduced on the synovial fluid and bubbles form that quickly expand and then burst – which is why you get that noise.

Not everybody’s joints will crack. Some people have a larger separation between the bones and some people can’t relax enough to allow the bones to separate. If you can crack, and your mom tells you that you’re going to get arthritis, she’s just yanking your chain. There is no scientific evidence that cracking your knuckles leads to arthritis. However, it can’t be good to repeatedly push joints beyond their normal physical range. Cracking your knuckles can cause a decrease in your grip, but unless you’re signing a multi-million dollar contract as a rock guitarist in the immediate future, it’s not worth giving up. It’s still found to be annoying by a lot of people though.

Alka-Seltzer is an effervescent antacid and pain reliever, first marketed …