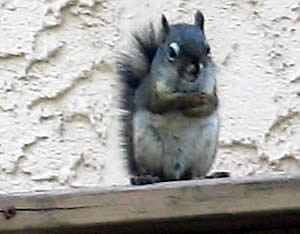 Pecker (so named for his attitude) is a squirrel who has graciously decided to let us share his territory. But it was not always so. It all began three years ago when we bought our house.

The first indication we were not alone, was a scratching on the other side of the ceiling during the night, which, needless to say, went over like bad gas during a Sunday service, and sent Her Highness into hysterics. Armed, and absolutely thrilled for the opportunity to terminate the life of anyone or anything stupid enough to invade my home, I searched the attic high and low, and found nothing. The third time, I even installed an infrared camera in the attic, and hooked it to a dvd recorder and our bedroom TV. After several hundred hours of recorded footage, nothing. This also sent Empress Doasisay into hysterics.

It took a spell, but I finally caught Pecker sneaking in through a hole beside my soffit. Not one to tolerate rodents, but restricted by Shriek from adding him and some taters, onion, carrots, etc., to the crock pot, I began to block his access to our home. As determined as I was to keep him out, he was just as determined to get in (he runs up our screen, so yes, he’s a he). I’d block one spot and he’d duck in another. He had more entrances and exits than a prairie dog town, but I was determined not to be beaten by a tree rat. 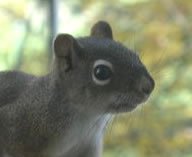 As more of his access disappeared, he began to become more desperate. I realized that because it was late fall, he had all his winter’s food stored above us, in what he considered his home, and he was prepared to die to get at it. Twice he fell over thirty feet down onto our cement driveway, while trying to find a new way in. I witnessed both times, and have to admit that it made me sick to my stomach to hear him hit. I knew the second time he fell and survived, that he’d end up dying if I didn’t do something. After consulting with the great and wonderful Wizard of Boss, it was decided that I’d have to build him something that he could make a new home in.

It took me a couple of days, but I fabricated and painted him up a custom seven room squirrel condominium, that fit perfectly under where our two roofs meet. Once it was stocked according to Mother Nature’s specs (dried corn, peanuts, mixed nuts, and other assorted rodent delicacies), the roof was added, and it was lifted into place. It didn’t take ol’ Pecker more than a day to figure out the new rules, and real soon he was hustling in and out, packing in a store of pine cones just for good measure.

Now, every morning he sits on the little perch that I built for him, surveying his domain before setting about his daily activities. He sure is one funny little dude, and definitely suffers from the ‘little big man’ syndrome. We’ve watched him sire two broods, fly across snow covered branches at -20 and heard hour upon hour of squirrel profanity as he swears at creatures foolish enough to violate his space. Watching Pecker scurrying around outside today, made me realize that I’m actually glad that I didn’t flour and fry him. I like the little critter now, and I’m kinda proud that I did what I did. 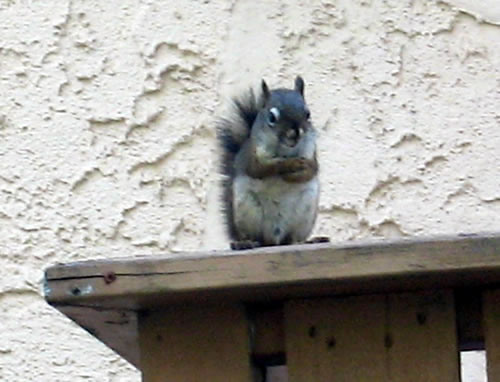 While sitting on the other side of our yard, watching to see if Pecker had yet another entrance to the house, and if so, where, Cathie snapped this photo of him staring at us. It wasn’t until she put the picture on her computer, that she realized Pecker had his arms crossed, and was probably tapping his foot, while giving us the evil eye for blocking all his entrances! 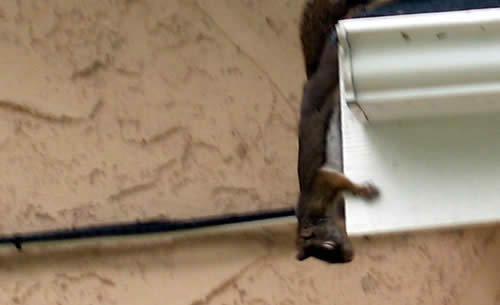 Pecker hanging over the edge of the eves trough. I’m not really sure what he is looking for, but our guess was that he was looking for a new way into the house! 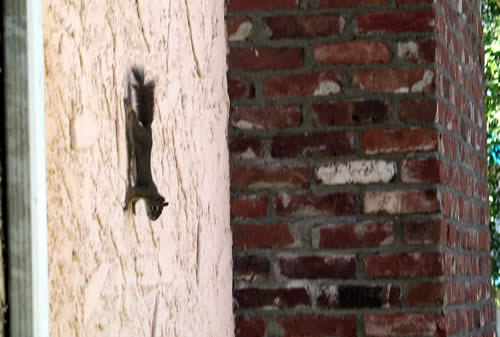 Yes that is Pecker, thinking he is Spiderman, or should I say Spidie-Squirrel. Once I realized that Pecker was prepared to die to get at his stored food that I had stopped him from being able to get to, I set about building a compromise. 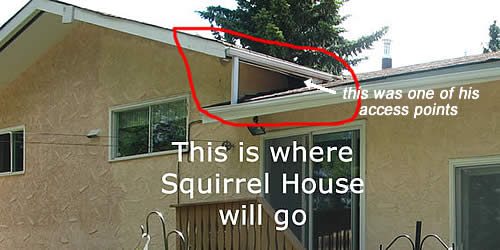 As indicated here, Pecker was getting in right up in the corner under the eve. Knowing he was used to going to this area to get in, I decided to place his new condo there. 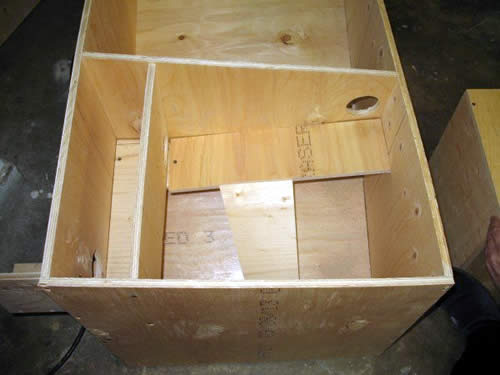 Building Pecker’s condo turned out to be like building something on a set for Dr. Suess. The basic frame is complete, now the partitions, corridors and ramps begin to be added. 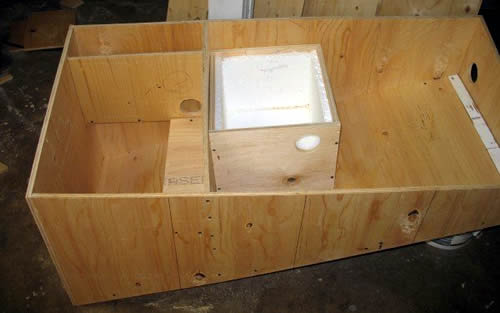 To make sure he had a warm nest, a 3/4 inch thick styrofoam lined box was assembled. As the floors, partitions and ramps are about to get added, I begin to seriously question my sanity. 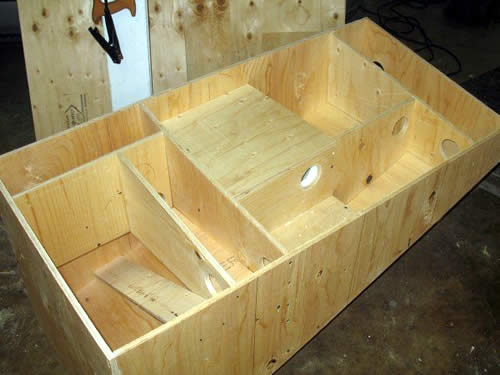 The nest is done, more of the floors, partitions and ramps have been added, and its really beginning to take shape. 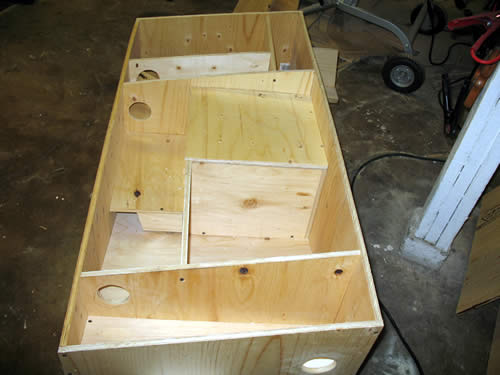 Another view showing all of his little labrynth’s “doorways” to get to each room. They also give him the ability to more effectively defend himself. 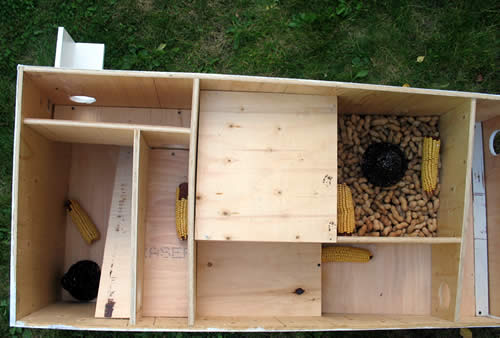 Pecker’s condo is now painted and stocked with corn, mixed nuts, sunflower seeds and 2 large bags of peanuts. How fitting, someone who’s nuts building a place for nuts. 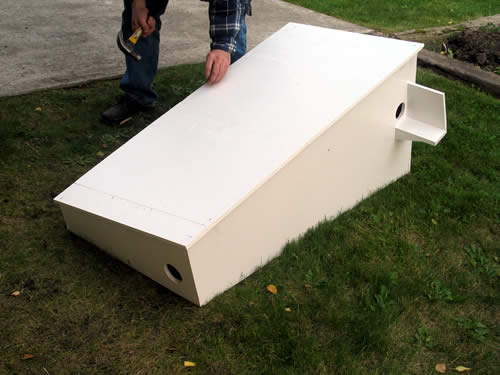 And the roof finally goes on. I’ve long since given up on retaining any shred of sanity, and have now ’embraced’ the squirrel. 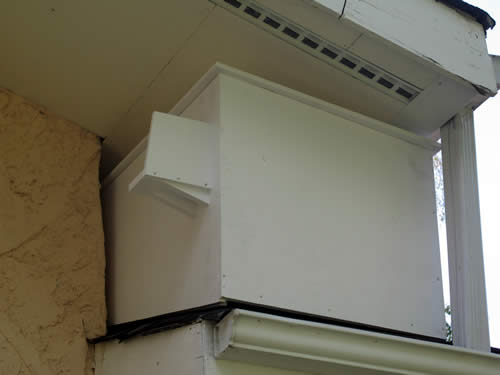 You can see his protective patio protruding on the left side. It stops owls, hawks and eagles from being able to swoop down on him, protects him from the harsh north wind and gives him an excellent view of his domain. He also likes to lay on his roof patio, like a rodent version of Charlie Brown’s Snoopy on his doghouse. 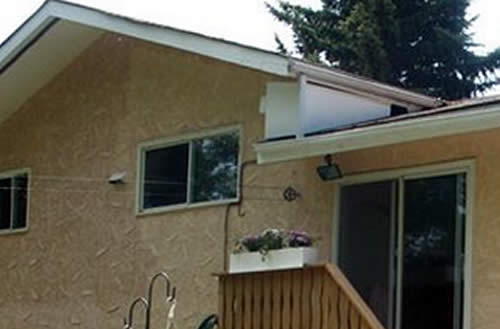 He can enter from two sides. The front faces the north, so his patio entrance is on the east side. His main entrance is now under the junction of the roofs, near his former entrance. 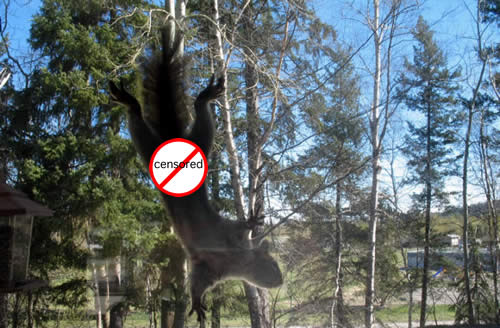 Pecker going down the patio door screen. As I said, we know that he is definitely a “he”! I think it’s his way of streaking us. 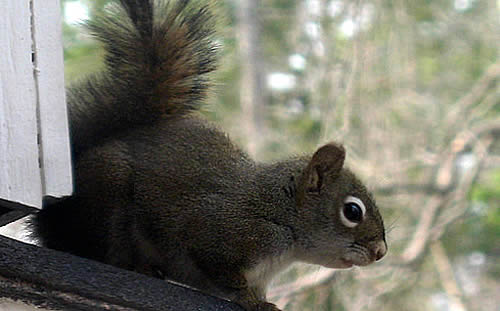 Pecker sits next to condo surveying his realm. He tolerates all birds, except our resident crows, who enjoying messing with his head to no end. No damage is ever done to any of them, but Pecker seems positive that he’s made it clear the yard’s his turf – trespassers beware! 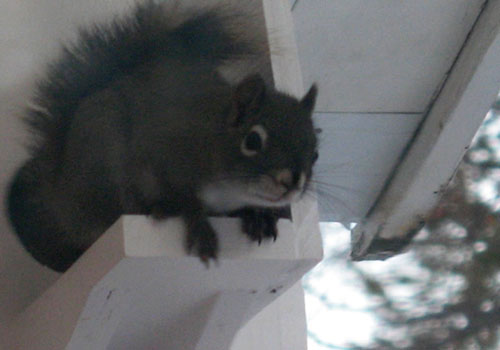 Pecker sits on his deck first thing in the morning, carefully checking out his kingdom. Sometimes it feels like he staring at me through the kitchen window, trying to telepathically tell me to put out more peanuts. For such a tiny little critter, he sure is one tough and brave cookie. It took a while for us to adjust to each other, but I think we’ve pretty well been adopted now.

Will’s Thoughts about bizarre celebrity children names. I’m sure that …