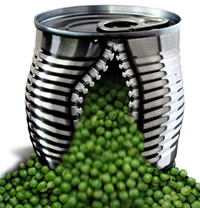 The judge asked, “And how many peaches were there in the can?” Harry answered, “Only six small pieces.”

The judge, who was well known to despise shoplifters, harshly began, “Then I sentence you to six days in jail….,” but, before the judge could finish pronouncing the punishment, Harry’s wife, Mary, interrupted and asked the judge if she could say something.

The judge, now slightly annoyed, asked, “And what have you to say in your husband’s defence?” Harry’s wife stood, looked the judge right in the eye, and said, “He also stole a large can of peas.”