Mullets Have Existed For Thousands Of Years

It’s a common misconception that the mullet originated in North America in the early 1980s, although that is widely regarded as the origin of the ‘Modern Mullet’. While the precise birthplace and birthdate of the mullet remains unknown, it’s been suggested that mullets may predate mankind’s ability to draw and write. History substantiates its existence in many ancient civilizations, from the Aztecs to the Vikings. 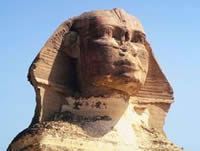 One of the most striking example of early mullets in history, and the largest, is the Great Sphinx. It’s thought to date back 4500 years, though some geologists believe that it dates back to 10,000 years due to signs of water erosion. If true, it’s a good indication that the mullet has been with mankind from the very beginning. Although the Sphinx has naturally been eroded, the mullet is still clear for all to see, notice the short hair at the front, complete lack of sideburns and the long flowing hair at the back.

Mullets were specifically banned from the Roman army, as enemies found it easy to grab the long hair to pull the hapless mulleted Roman’s head back to slit his throat. This tradition of requiring short hair still exists in most military forces around the world today.

The Mullet Is A Cultural Icon

Through the ages, many different advanced civilizations have been influenced by the mullet, such as the Assyrians, Persians, Greeks and Canadians.
Want your own mullet? Hair Stylist Stacy, over at Hairfinder.com has a great “how to cut a mullet”.

Classic Mullet:
Traditional haircut on the top and sides of the head (trimmed short around the ears and on top), layered and long in the back.

Ponytail Mullet:
The classic mullet with longer hair pulled back and tied into a ponytail.

Cropped Mullet Fade:
Cut shorter on the top and slightly longer in the back, with the faded areas just above and behind the ears. The short hair on top is brushed forward in order to create bangs that lay across the forehead.

Hipster Mullet:
Top and sides are cut to the same short length with a clear line below the temples where the hair is trimmed short in the shape of a burst fade. The back is left long.

Temple Fade Mullet:
Short and straight on the top and shaved closely on the sides and long in the back.

Tapered and Blended Wavy Mullet:
Top is layered, length on top is around 3-4 inches. Back is closer to 5-6 inches. A small section above and in front of the ears is trimmed shorter and tapered.

Tousled Wavy Mullet:
Tousled hair slightly shorter on top and longer in the back.

Choppy Layered Shaglet Mullet:
Combines the shag cut with a mullet. Shorter hair on the top and sides, with stair step layers that lengthen from the bangs down to the longest area in the back.

Bowl Cut Mullet:
Uniform length around the front and sides (like a bowl cut), and much longer in the back.

Long Curly Mullet:
Bangs are cut to a brow-grazing length and follow around to the sides of the head. From the temples down to the ears, the length is buzzed short to create a faux fade. Long in the back from the crown down to the neckline.

Shoulder-Length Mullet With Bangs:
Short bangs, medium sides and long in back.

Disconnected Mushroom Cut Mullet:
top and sides are cut in a blunt, uniform line around to just behind the ears. From there, the length is unlayered and much longer for contrast.

It’s amazing how something as harmless as a little prank …