After reading Four Blood Moons by John Hagee, I found it to be just another end of the world as we know it ‘prophecy’. There has been so many of these predictions that I no longer believe any of them will come true. Or, the information is so vague anything can be read into them. I feel like I’m being sold a bill of goods without being able to question what I’m reading or listening to.

Hagee writes about the Jews being God’s chosen race. As an agnostic I ask why God needs to have a chosen race, especially on a planet out in the boonies of the Milky Way. Are there, by chance, other ‘chosen races’ throughout the Universe? Bit of a stretch here for a city that probably isn’t known outside Planet Earth. Hagee also wrote ‘the Universe revolves around Jerusalem’. Considering no one knows exactly how big the Universe is, I say it is highly unlikely Jerusalem is anywhere near the center of it. If any alien races exist I wonder what they think of the conclusions we’ve come to, provided they’re not as deluded as we are.

I agree with Hagee that ‘Historic Christianity has left an evil legacy’. From the Crusades, holy wars, sexual indiscretions, over inflated egos has the Church plenty of questions to answer. What has happened to unconditional love, that goes beyond feelings to take direct action with random acts of kindness? This is not for any target group, but to anyone in need of it. Even if one acts locally it goes a long way.

Every time the question of end time prophecy is asked, a different answer comes up. I guess getting a different slant on things is better than getting a standard answer every time. But don’t tell me that Spirit is speaking through you, it looks as if the Spirit is saying different things to different groups. It just doesn’t wash with me. When I hear of God casting stones or meteors at Earth, I think it’s more of a random act than judgement. I’m of the opinion that our time on Earth has an expiry date. In geological terms, we just got here and will go extinct like other species before and after us, much like the rock band Kansas sang ‘All we are is dust in the wind.’ If and when a nuclear facility blows up, our day on Earth is finished. Even our technological gadgets are subject to solar flares from what the sun throws our way.

We humans are a repetitive bunch. No matter how many social causes, stages of enlightenment or spiritual journeys we embark on, we love our routine. Most of the time all we really do is replace one B.S. system for another one. So all what is usually accomplished is superficial changes, much like rearranging the deck furniture on the Titanic as it was sinking. We’re very competent in kidding ourselves into accepting anything that authority figures lead us into. Political correctness hasn’t done much except put us into a bland mixture of generic material. Rigorous honesty is the best way to get things on the table so solutions can be worked out.

Another thing that was written in Four Blood Moons, was a tattoo that a future Anti-Christ will force everyone on the planet to have embedded onto their right hand or forehead. This tattoo has somehow been connected with the 666 in Revelation 13. Some think it is a microchip that will be inserted into the human body. The penalty for refusing, according to Hagee, is beheading. But if you do accept taking the tattoo, God will cast you into the Lake of Fire in Hell. It sounds like no matter which side you are on, fear is a motivating factor. So scare tactics may keep people from taking a particular stand and go along with the herd mentality. What has happened to rational thought? 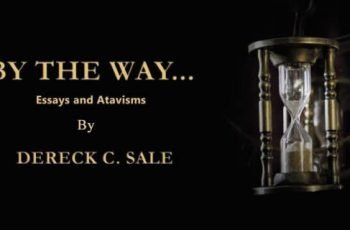 By The Way… Essays And Atavisms I recently found myself …