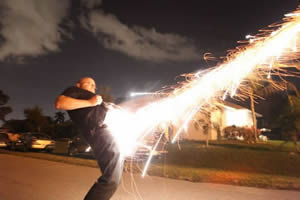 Y’all sit back and let tell you a tale about a redneck who roasted his weenie. Now, there’s a right and wrong way, to do everything. Such as in the case of giving your genitals a little flair, or flare, as in the case of 23-year-old Jorge Perez, of Lehigh Acres, Florida.

The bizarre story unfolded as Lee County Sheriff’s responded to a medical assistance call of a shot fired, and man down on February 3rd, 2013. Somehow managing to suppress their giggles at the scene that appeared before them, they called for emergency medical responders. It turns out that curious Jorge had been dry firing a flare gun in his shop, then for an unknown reason, had loaded it and set it down.

Remembering it a few minutes later, he forgot that the gun was loaded, and fired it at the ground. This time, a blazing flare struck the floor and ricocheted straight into his genital area, causing a ‘redneck weenie roast’, resulting in him being taken to the hospital with multiple burn wounds and lacerations to unmentionable places.

Enough of the taxes already! Tax our land, Tax our …