In a day and age when science does incredible things, I reckon that it remains entirely out of touch with reality. Now, I can see the possible benefits of cloning food products, but only because of the way this world’s a’going. But, as science tries to engineer nano-miracles and commando anti-viruses, it is doing nothing for the day to day needs of our nation.

I suggest that instead of trying to breed the world’s smallest fruit fly, they engineer a big breed that is like those algae eaters in aquariums, only that lives off the moss on roofs. As an alternative to biomorphing a six legged, four breasted chicken, how about doing something practical, like infecting mosquitos with something that makes them suck fat instead of blood. They could be a pal to homeowners everywhere by building cyborg crows that weed and feed gardens, mow lawns and trim hedges. Then, for a touch of work and play, create remote controlled pigeons that poop ashphalt at the touch of a button, then say goodbye to potholes!

Heck, invent a real one of those flashy memory thingies from Men In Black, and make it a mandatory parenting gift at all baby showers. Do men worldwide a huge favor, and invent a cloaking device that protects them from womens’ dang intuition rays. Help struggling shoppers with a small instrument that scans vegetables at the market and tells freshness and ripeness. Better yet, make currency that dissolves (or turns to something else) when touched by tax agents. Yep, I figure if scientists want to continue getting those obscene research grants to study the secret sex lives of cells, and perplexing pee splatter patterns in toilets and such, they can at least whip up a few things to give us a little something, something in return for our dollars, if ya know what I’m saying. 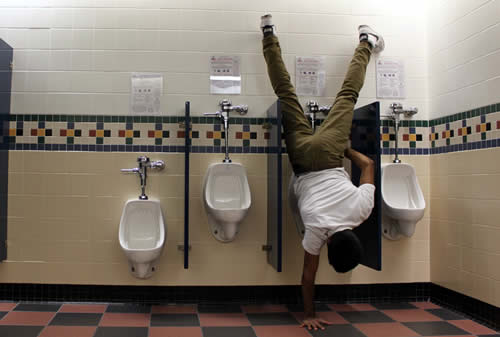 Apparently putting sixty pounds of fertilizer on your lawn between …