Will’s Thoughts – Large Potholes With Their Own Zip Codes

Happy pothole season! Yep, it’s that time of year again, and everyone round here has a story about a monsterous paved black hole that they, or a relative, almost lost their life in. Our potholes are truly legendary, and yet, as much as people complain about them, they do serve a purpose sometimes. It turns out that gangsters love big shiny rims and pimped out vehicles. Apparently, craters that look like they were the result of an asteroid strike, and low profile tires on chromed 20’s, are ‘incompatible’. Needless to say, the gangsters are appalled at the condition of the roads, and are now thinking about relocating.
When we say that our streets have gone to hell, we literally mean it. We’re being sued by Lucifer for potholes 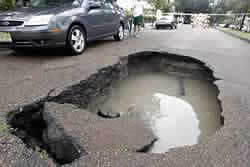 that destroyed his front yard. Heck, paved pools are getting so large, our tow trucks now pack scuba gear and Seadoos to locate and pull people out. Why, I saw one so big the other day, (how big was it?) a rescue squad was trying to time their recovery attempts to happen between the water’s huge swells, to avoid being smashed against the jagged rocks along the shore. There are even potholes around so deep that ‘Steep Grade’ signs have been posted going into them, and turn out lanes have been built for vehicles who’ve burned up their brakes. Apparently, there has even been building permit applications, and Starbucks is currently in negotiations. 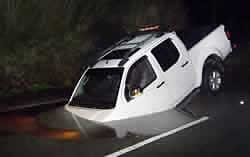 Now you city folks might think I’m exaggerating, and think those tiny little pocks in the pavement you run across are potholes, but that just makes us laugh until we pee. Why, we have holes so huge that they have their own postal codes! Heck, not only do we have to worry about losing our lives in roadway Poseidon adventures, our bodies might sink so deep they’ll be too expensive to recover. I reckon it won’t be too long before the government builds floats and campgrounds, and starts charging people fees. Greenpeace just got into town, search and rescue crews are selling gift cards, and our film commission was even contacted by the famous film director, James Cameron. It seems that Jim’s looking to film the world’s deepest dive, and he’s heard that one of our potholes is even deeper than the Mariana Trench. 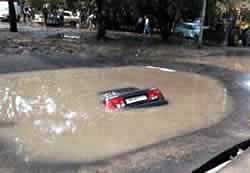 Now, being a curious guy (in way too many ways), I’ve always wondered why governments don’t just simply make lemonade from lemons. Potholes have won war after war, year after year, so instead of stupidly continuing to fight them, why not turn them into businesses and make money? I say just leave the potholes alone, divert the roadways around them, and then exploit the economic opportunities, such as promoting international pothole tourism, putting in waterslide parks and hosting multi-national boating competitions on them. I reckon we could make a whack of cash. Heck, I bet we’d make a million bucks just selling pet potholes (petholes) on Ebay, but we’d have to hurry, because the SPCP (Society for the Prevention of Cruelty to Potholes) would quickly appear. Yep, it’s pothole season folks, but that doesn’t mean staying home. It’s really not that bad. Just remember to take a personal locator, food, water, flares and survival gear, then get out there and enjoy! 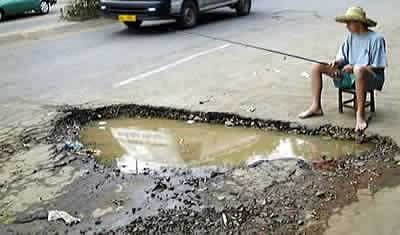 Will’s Thoughts About Our Annual Female Reunion Recently I had …

Will’s Thought’s – Tips On How To Have Fun With …