I have learned that garage sales allow us to be voyeuristic, to peek inside the lives of other people without fear of embarrassment or reprisal. I have learned how garage sales are the perfect example of that old saying, “One man’s trash is another man’s treasure”. I have learned from garage sales that humans love stuff, and all of our stuff is important at the time we decide that we ‘need’ it. As a result, we accumulate massive amounts of stuff, but the majority of stuff ends up as unused stuff. After decades of owning the stuff, we finally reach the point where we have to get rid of some stuff so that we can get more stuff, so we have garage sales.

I have learned that garage sales are ‘green’, recycling products instead of using vanishing resources to make more. I have learned that garage sales cause physical and visual changes in us, beginning with high blood pressure. As people stream from vehicles, you can literally see them go from their natural state to full blown predator in seconds. No matter how perfect or beautiful things are, our predator masks make us believe that it’s okay to say ignorant things like, “Humph, I can buy that at P-Auto for a lot less”, or “You’re asking $25. Will you take $5?”

I have learned that garage sales can be hypocritical. I’ve experienced, firsthand, the embarrassment and frustration of a finger-shaking spouse informing me that in order to buy something, I MUST justify its purpose (which, for a blabbermouth like me is normally a piece of cake, except that she added a proviso that it had to meet her ‘approval’). Choosing not to remain celibate for decades at a time, I complied. Upon arriving home, however, I found a large number of brightly coloured rubber toy lizards (and an alligator) oddly strewn among our newly acquired stuff. When questioned, her Highness informed me that they were for her flower gardens (perhaps meant to scare away bugs?). Though tempted, I did NOT say my thoughts with my outside voice.

But the most important thing that garage sales have taught me is that we all have a lot in common. Whatever our age, whatever our ancestry, the tables of merchandise awaken our ancient instincts and lure us from our homes. From the haughty to the naughty, we all love getting great deals on stuff. Lastly, I’ve learned that garage sales aren’t just for cheapskates anymore, so everybody get out there, smile and have fun stretching your legs and budgets while recycling and helping to save our planet. 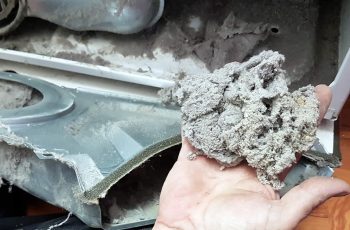 Cleaning Your Dryer Lint System Is A Must Whether electric …

Will’s Thoughts – How Society Continues To Pay For Those …