This the the story of Canada’s female First Nation saint. It all began in a hospital where as his parents sobbed, and last rites were performed, 5-year-old Jake Finkbonner neared death after flesh-eating bacteria infected him through a cut on his lip. His parents had begun discussing donating his tiny organs. Then a miracle happened. A relic from ‘Kateri Tekakwitha’ said to having healing properties was laid upon his leg, and prayers were prayed to her. Jake is now a healthy young man, and travelled all the way to Rome to see the woman he believes saved his life become the first First Nation saint ever canonized in history.

Kateri Tekakwitha, a kind and loving First Nation woman (pronounced ‘gaderi dega gwita’ in Mohawk), was born in 1656 and died April 17, 1680. Kateri was baptised as Catherine Tekakwitha, and was informally known as ‘Lily of the Mohawks’. She was an Algonquin-Mohawk Catholic virgin, and a religious laywoman.

Born in present-day New York, she survived smallpox, was orphaned as a child, and later baptized as a Roman Catholic. She spent the last years of her life at the Jesuit mission village of Kahnawake, just south of Montreal, in ‘New France’.

Tekakwitha professed a vow of virginity until her death, at the age of 24. She was known for her virtue of chastity and corporal mortification of the flesh, as well as being shunned by her tribe for her religious conversion to Catholicism.

Kateri Tekakwitha was the first Native American woman to ever be venerated in the Roman Catholic Church. She was beatified by Blessed Pope John Paul II in 1980. On February 18, 2012, Pope Benedict XVI announced, at Saint Peter’s Basilica, that Tekakwitha would be formally canonized on October 21, 2012.

Various miracles and supernatural events are attributed to her name, after her death. Jake’s 2006 cure from the infection, was deemed medically inexplicable by the Vatican, and was the “miracle” that was needed to propel the 17th century Native American on to sainthood. Kateri was the first Native American to ever receive the honor of being canonized.

Jake is fully convinced, as is the church, that the prayers his family and community offered to Kateri, including the placement of a relic of the saint on Jake’s leg, were responsible for his survival. Jake is now 12, an avid basketball player and cross-country runner, and was present at the canonization, along with hundreds of members of his own Lummi tribe from northwest Washington state, and from reservations across the U.S. and Canada, who converged on Rome to honor one of their own.

It’s a ceremony the Catholic Church hopes will encourage Native Americans to keep to their Christian faith amid continued resentment among some, that Catholicism was imposed on them by colonial-era missionaries centuries ago. 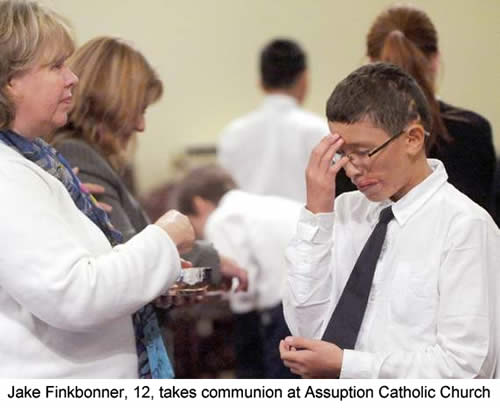 Speech is an art. When one knows what, when and …

The wind was howling, sleet was slashing at his windshield, …