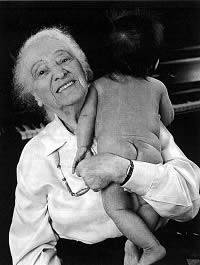 The woman who create Lamaze International’s ‘breath control’ was Elisabeth Bing. Elisabeth was born on July 8, 1914 in Berlin, Germany. She fled Nazi Germany with her family to England, where she studied physical therapy. The work with new mothers ignited her thinking about delivery practices, and in 1949 it was an interest she took with her to the United States.

It wasn’t long before her interests drew her to the work advanced by a French obstetrician, Dr. Fernand Lamaze. His work during the 1950s involved using breathing and mental preparation to manage labor pain without medication. In 1960, Elisabeth and the late Marjorie Karmel established what is now Lamaze International.

Elisabeth Bing taught breathing and relaxation techniques to generations of expectant mothers, wrote several books about birth and pregnancy, and encouraged both men and women to be better prepared for the arrival of their babies. This led to a huge increase in fathers being in delivery rooms, and far more involvement in their children’s lives.

In a 1990 Lamaze magazine, Elisabeth wrote, “I was certainly considered a radical.” Addressing how childbirth education has since become so common, she stated, “This so-called fad has been proven not to be a fad.”

But, over time the concept of refusing all painkillers during labor has fallen out of vogue with many expectant mothers, and some couples prefer alternative birth preparation classes that are shorter than Bing’s six-week Lamaze program.

Changed The Whole Attitude Toward Obstetrics And Pregnant Women

Still, she told The New York Sun in 2004, “I feel we have changed the whole attitude toward obstetrics and pregnant women, not necessarily technical changes, but the psychological and practical approaches to pregnancy.”

The woman who made millions of dollars from heavy breathing, Elisabeth Bing, passed away in her New York apartment at 100 years old on May 15th, 2015. She was a remarkable woman, with a remarkable story to tell. For an in-depth article about Elisabeth, read the excellent one written by Karen Barrow on May 17, 2015, published in the New York Times.

Will’s Thoughts – War On Drugs And Thugs Is A …

The next time you’re texting and pouring a cup of …