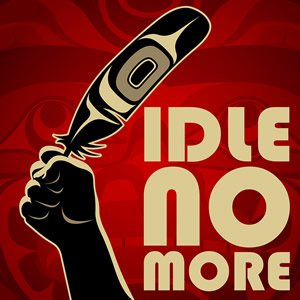 As racism in Canada continues to grow, the inevitable confrontation between First Nation Canadians, and all other Canadians, is beginning to look like it is finally nearing. I’m sure that you have your own thoughts about the ‘Idle No More’ movement, and the racial confrontation about to take place that was set up back in 1763, one that is politically necessary in order for all parties to march forward into the future as a strong and united nation. While not forced into labour like African slaves brought to the United States, the Constitution Act of 1867 allowed the government of Canada to impose as much racial segregation, and social and economic restriction on First Nations, as was imposed on many slaves living south of the Canadian border.

Then, under the Constitution Act of 1982, Canadians were supposedly entitled to ‘equality’ before and under law, and equal protection and benefit of the law. However, the two sections below allowed the government to legally contradict itself, and paved the way for it to continue exercising open and blatant racism toward First Nations.

15. (1) Every individual is equal before and under the law and has the right to the equal protection and equal benefit of the law without discrimination and, in particular, without discrimination based on race, national or ethnic origin, colour, religion, sex, age or mental or physical disability.
Marginal note:Affirmative action programs

(2) Subsection (1) does not preclude any law, program or activity that has as its object the amelioration of conditions of disadvantaged individuals or groups including those that are disadvantaged because of race, national or ethnic origin, colour, religion, sex, age or mental or physical disability.

This section (2) allowed the government to continue to segregate and control First Nations as if they were mammalian incompetents, socially and economically developmentally disabled, incapable of managing their own affairs, because in its opinion, it was for ‘the benefit’ of First Nation persons. By simply designating entire nations of human beings as ‘disadvantaged’ because of race, the government missed the fact that it was its own laws that were responsible for putting First Nations people at a disadvantage to begin with.

Historically, the relationship between First Nation peoples, and the government of Canada has been, and continues to be, one of First Nations being considered an inferior race begging for alms at the government’s gates. Despite the constant growth in disparity between First Nations and all other Canadians, both sides seem to be comfortably trapped in an very uncomfortable rut. The government, not knowing what to do, or, unwilling to do any more than it does, throws money and resources at First Nations, much like a keeper figuratively feeding animals in a zoo. First Nations, revolted by the treatment that they receive, also do not know what to do, so they resort to tried and true practices, such as blockades, protests, etc. Assuming that the zoo’s ‘animals’ are making so much noise because they are still hungry, the government keepers throw more money and resources at them, which causes the cries of those treated as beasts to die down. Temporarily.

The issue that is really at issue, is that neither First Nations, or the government, has a bloody clue of where to go from here. They have both painted themselves into corners, and now bat social semantics around like a frantic racquetball game, hoping desperately that the public doesn’t notice their incompetence. Luckily for First Nation leaders and the government, the public is so conditioned to remain relatively neutral during these recurring conflicts, that it now seems content to limit its engagement to mumbles and groans of slight discontent at the evening news, before tuning the ‘native’ issue out yet once again, and carrying on with their lives.

But, the conditions at issue remain, and will continue to remain, because three hundred years of government control has proven conclusively that government control and oppression of First Nations has been, and currently is, a total and miserable failure. The truth is that the system is horribly broke on both sides, and though the solution is crystal clear to most Canadians, neither First Nations, or the government is willing to do what ultimately must be done to bring finality and resolution to the troubling issue. The government’s relationship to First Nations has grown to become such a massive industry, that any restructuring now will cause major upheavals, economic and social, to the whole nation. So, despite all the noise, positioning and demonstrating of Idle No More, no one seems to really be ready, willing and able to inflict the short term pain that is clearly necessary for long term gain.

The result is, that after all the television cameras have gone home, and the political pundits have exhausted their wealth of witticisms, nothing will really change. First Nations will continue to be treated as developmentally disabled persons, and social and educational systems will continue to fail them miserably. There will be the usual warm and fuzzy feelings by suits, patting themselves on the back for promises never to be kept, while hungry and desperately bored First Nation children stare outward from government imposed ghettos, growing up to swap ancient hunting skills for easy economic handouts. Hopeless, most will perpetuate the cycle of government taught dependency, occasionally politically gnawing at the hands that feed them, in order to get a ‘little more’. In turn, they will pass on the new skill that the government has taught them, that of becoming a better beggar, as they become idle once more.

Oh boy, suddenly it’s winter! Although there is not much …